India is growing at a speed that no one ever expected. Earlier Indian culture was about spending less than they have in hand, basically earning first. But times have changed. The Millennials have brought various changes to society, buy now and pay later is one of those changes generation Z can thank millennials for. As the name suggests, buy now pay later apps in India is a service that lets you consume now and pay after some time for what you have consumed. In this article, we will learn more about the best pay later apps, buy now pay later in EMI, and pay later apps for students.

With credit cards, it started. For a long time now, Indians have been dependent on credit cards. Buy now, pay later is a credit card-based stuff itself but evidently a better version of credit card where you will not even need a physical card or long processing applications and formalities.

With such apps, you can avail the benefit of EMI using buy now pay later in EMI. Though, it has a shorter period to pay, almost 15 to 30 days. Seems like a billing cycle, right? Well, why not? Everything is shifting to post-paid nowadays.

So, isn’t it fascinating for you to think that one can pay for everything on a monthly basis just like an electricity bill? It does sound amazing. In short, BNPL is nothing else but a way to raise the flexibility of credit which is interest-free and available for everyone.

It is important to remember that no-cost EMI is where you need not pay interest in installments as only the principal amount is paid back.

Slice is one of the best pay later apps for students. The reason being slice works like a miracle for those who don’t have credit cards. Get cashback up to 50% with this when you shop from Myntra, Flipkart and other such platforms. This feature in Slice is known as Sparks.

Another benefit is a slice card. It helps you with 1-2% cash back option over sparks and helps you with timely payments. The best part here is that it’s all free even on international transactions.

The catch here is that do not go for more than 3 months for EMIs that will attract 12% to 15% interest.

With the tagline ‘less price to pay, more time to pay this app is sure to deliver. Just download it, complete your profile, upload your KYC, use automatic repayments and use it like you want to. ZestMoney offers the following features:

Jupiter Edge Pay Later App seems to be an amazing combination of speed and convenience. It claims to be the fastest UPI app. Here are some more things you get in this app:

This is a famous buy now pay later app. The best features of LazyPay are:

Amazon is the best e-commerce luring most of the customers in the incredible stuff and with great offers. Not only that, now a feature of pay later has popped up as well. Some things one should know about Amazon pay later are:

Also Read: Can You Get CashBack With Apple Pay?

From DTH recharge, electricity bill or shopping, whatever it may be, Freecharge pay later is a life saviour. Simply, it’s like a friend you can take money from, no questions asked. But, yeah this friend needs a pay back option too for it to work. The primary features of this app are listed below:

Here’s how to get started:

4. Provide your info & KYC details like AADHAR and PAN.

5. Start getting benefits by checking out everytime using freecharge.

Get up to Rs. 5 lakh credit with this app and pay later easily in the fastest manner possible. Get a pre approved limit within minutes and access to money within 24 hours. Some features differentiating this app from the rest include:

Other things you can do with Money tap is getting various loans, might it be education loan, medical loan, repair loan etc. in easy steps. It is important to note that it charges interest on money borrowed.

If you are wondering how to get started it’s pretty easy.

1. Download the Money tap app and create your profile.

2. Wait for your KYC to be verified which takes a couple of days after registration.

Do note that 15 days repayment is mandatory to avoid late fee. 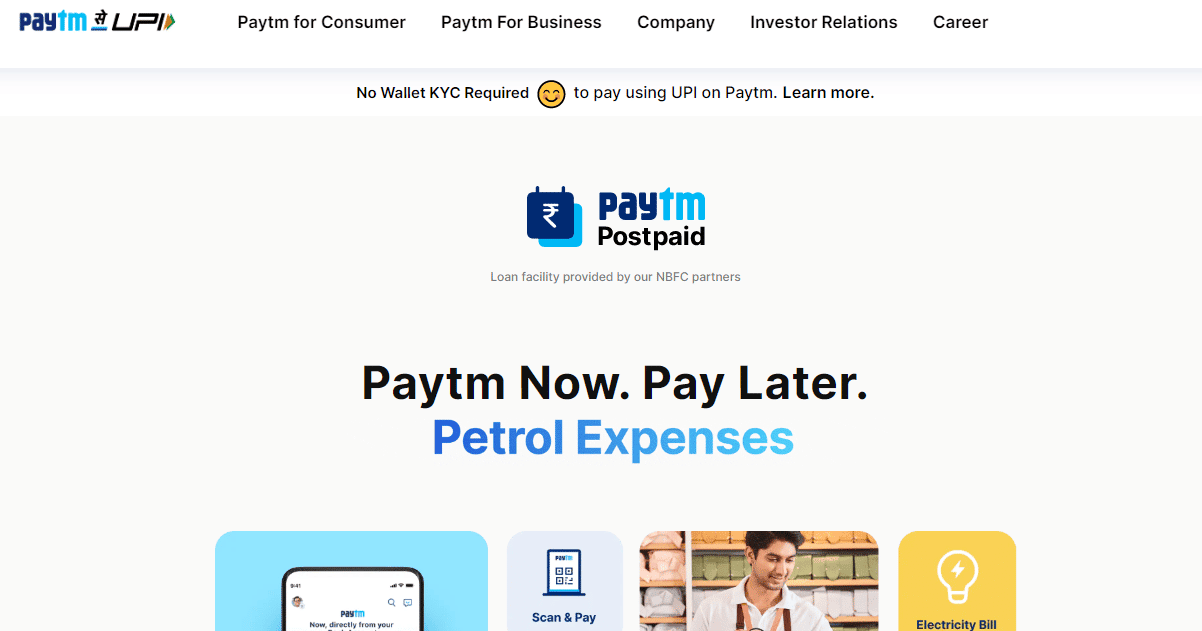 As we all know what huge service paytm has provided in the history of UPI, paytm postpaid is no less. Get amazing credit of Rs. 60,000 in a one-go with Paytm postpaid. It’s uniqueness is defines by the following attributes:

It comes in three variants :

1. Go to Paytm website/app and click on All Services.

3. Find Paytm Postpaid here and follow the process till the end.

It is owned by Bharatpe that enables users to get credit up to Rs.10 Lakhs based on your CIBIL Score. Scan and get instant credit to make payment and split into EMIs for repayment. It provides:

So. get registered instantly through its Android app, iOS app, website or via WhatsApp today!

More for businessman app which provides any amount between 25k to 25 lakhs as credit with zero interest during the billing period. These are the things you should know about Epay later:

ICICI bank is providing credit online with its pay later feature available on the ICICI bank app. To apply for ICICI pay later, do as follows:

3. Verify your details and Set up a savings account for auto debit.

4. Create your Virtual payment address and complete the process.

5. Finally, go back to the Dashboard and avail credit.

The following attributes make it one of the best buy now pay later apps:

It provides you access to various in demand apps and offers cashback on 300+ apps. Book movie tickets, pay for travel or eat with the best possible buy now pay later app.

Things to know about Ola money postpaid before you get started:

3. Pay for anything you want and clear your dues similarly.

Get credit up to Rs. 1 lakh instantly with Flipkart pay later. No different app needed just go to flipkart and buy without paying for it. Leave with a promise to pay next month. Avail credit easily with PAN and AADHAR after verifying your bank account details. Flipkart pay later offers: 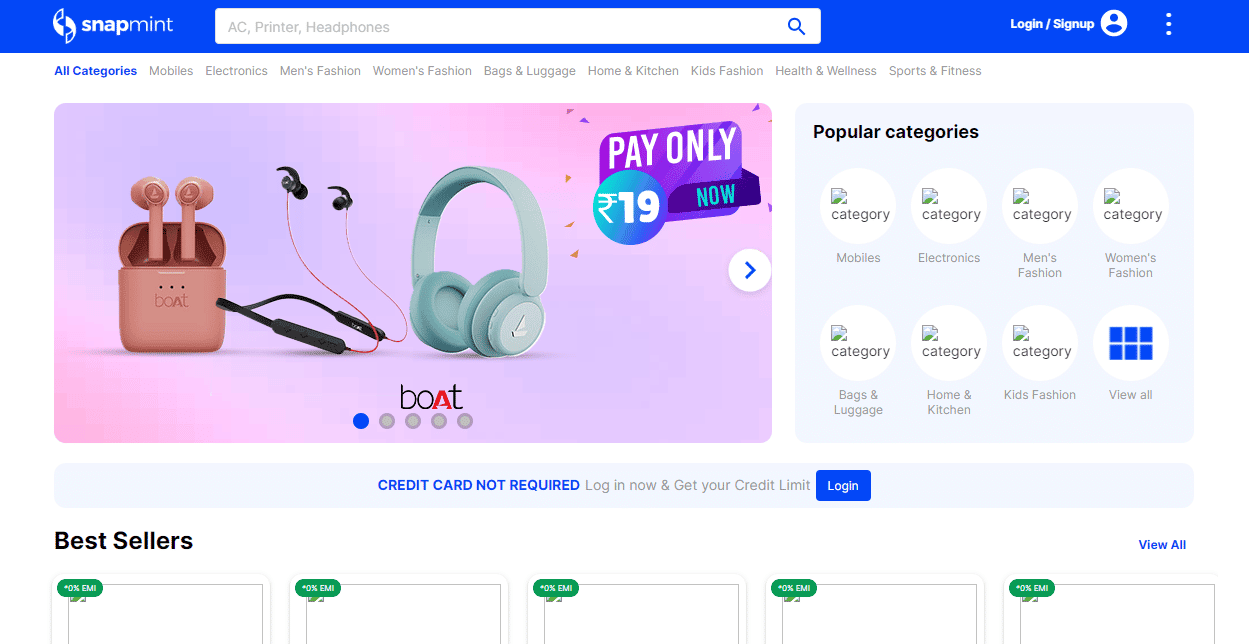 Within e-commerce industry, snap mint is deemed to be the biggest player amongst the buy now pay later apps in India. It is easy to download and provides great EMI options without credit cards. The other merits of Snapmint include:

Ready to start with going into a buy now pay later app. But one should know the rules related to these apps in India.

Though Buy now pay later apps do appear like personal loans, they have some crucial differences:

So by now, we are sure you would have understood all about buy now pay later apps in India. It is best to weigh the pros and cons and then conclude whether you want to go ahead with these apps or not. If you wish to proceed with this, then you can consider the above-recommended Buy now Pay later apps.