Does the Wall Street Journal seem to have done a hatchet job on the microfinance sector of India?

RAMANAGARAM, India – A credit crisis is brewing in “microfinance,” the business of making the tiniest loans in the world. Microlending fights poverty by helping poor people finance small businesses — snack stalls, fruit trees, milk-producing buffaloes — in slums and other places where it’s tough to get a normal loan. But what began as a social experiment to aid the world’s poorest has also shown it can turn a profit.

That has attracted private-equity funds and other foreign investors, who’ve poured billions of dollars over the past few years into microfinance world-wide.

The result: Today in India, some poor neighborhoods are being “carpet-bombed” with loans, says Rajalaxmi Kamath, a researcher at the Indian Institute of Management Bangalore who studies the issue. In India, microloans outstanding grew 72% in the year ended March 31, 2008, totaling $1.24 billion, according to Sa-Dhan, an industry association in New Delhi.

“We fear a bubble,” says Jacques Grivel of the Luxembourg-based Finethic, a $100 million investment fund that focuses on Latin America, Eastern Europe, and Asia, though it has no exposure to India. “Too much money is chasing too few good candidates.”

Here in Ramanagaram, a silk-making city in southern India, Zahreen Taj noticed the change. Suddenly, in the shantytown where she lives, lots of people wanted to loan her money. She borrowed $125 to invest in her husband’s vegetable cart. Then she borrowed more.

“I took from one bank to pay the previous one. And I did it again,” says Ms. Taj, 46 years old. In four years, she took a total of four loans from two microlenders in progressively larger amounts — two for $209, another for $293, and then $356.

At the height of her borrowing binge, she says, she bought a television set. The arrival of microfinance “increased our desires for things we didn’t have,” Ms. Taj says. “We all have dreams.”

Today her house is bare except for a floor mat and a pile of kitchen utensils. By selling her TV, appliances, and jewelry, she cut her debt to $94. That’s equal to roughly a quarter of her annual income.

Around Ramanagaram, the silk-making city where Ms. Taj lives, the debt overload is stirring up social tension. Many borrowers complain that the loans’ effective interest rates — which can vary from 24% to 39% annually — fuel a cycle of indebtedness.

In July, town authorities asked India’s central bank to either cap those rates or revoke lenders’ licenses. “Otherwise, the present situation may lead to a law-and-order problem in the district,” wrote K.G. Jagdeesh, deputy commissioner for the city of Ramanagaram, in a letter to the central bank.

Alpana Killawala, a spokeswoman for the Reserve Bank of India, said in an email that the central bank doesn’t as a practice cap interest rates for microlenders but does press them not to charge “excessive” rates.

The mosque leaders are also demanding that lenders give them an accounting of their finances. The lenders say they’re not about to comply with that.

The repayment revolt has spread to other communities, including the nearby city of Channapatna, and could reach further across India, observers say. 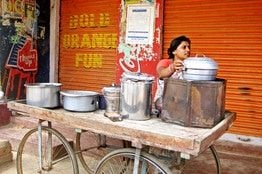 Lalitha Sharma, top, racked up 10 loans from the many microlenders who have set up shop in her slum over the past few years. Here she helps with her husband’s snack stand. Like many of her neighbors in Ramanagaram, India, she can earn about $8 a week, on average, working in the city’s silk factories.

“We are very worried about this,” says Vijayalakshmi Das of FWWB India, a company that connects microlenders with financing from mainstream banks. “Risk management is not a strong point for the majority” of local microfinance providers, she adds. “Microfinance needs to learn a lesson.”

Nationwide, average Indian household debt from microfinance lenders almost quintupled between 2004 and 2009, to about $135 from $27 or so, according to a survey by Sa-Dhan, the industry association. These sums are obviously tiny by global standards. But in rural India, the poorest often subsist on just a few dollars a week.

Some observers blame a fundamental shift in the microfinance business for feeding the problem. Traditionally, microlenders were nonprofits focused on community service. In recent years, however, many of the larger microlending firms have registered with the Indian central bank as a type of for-profit finance company. That places them under greater regulatory scrutiny, but also gives them wider access to funding.

This change opened the door to more private-equity money. Of the 54 private-equity deals (totaling $1.19 billion) in India’s banking and finance sector in the past 18 months, microfinance accounted for 16 deals worth at least $245 million, according to Venture Intelligence, a Chennai-based private-equity research service.

“We’ve seen a major mission drift in microfinance, from being a social agency first,” says Arnab Mukherji, a researcher at the Indian Institute of Management in Bangalore, to be “primarily a lending agency that wants to maximize its profit.”

Making loans in the poorest India sounds inherently risky. But investors argue that the rural developing world has remained largely insulated from the global economic slump.

International private-equity funds started taking notice of Indian microfinance in March 2007. That’s when Sequoia Capital, a venture-capital firm in Silicon Valley, participated in an $11.5 million share offering by SKS Microfinance Ltd. of Hyderabad, India, one of the world’s largest microlenders.

“SKS showed the industry how to tap private equity to scale up,” said Arun Natarajan of Venture Intelligence.

As of last December, there were over 100 microfinance-investment funds globally with total estimated assets under management of $6.5 billion, according to the Consultative Group to Assist the Poor, or CGAP, a research institute hosted at the World Bank.

Over the past year, investors have poured more than $1 billion into the largest microfinance funds managed by companies, a 30% increase. The extra financing will allow the industry to loan out 20% more this year than last, much of it to countries such as the Ukraine, Cambodia and Bosnia, CGAP says.

Here in Ramanagaram, Lalitha Sharma recalls when the first microfinance firm arrived seven years ago. Those were heady times for her fellow slum-dwellers: Money flowed freely. Field agents offered loans to people earning as little as $9 a month.

They came to Ms. Sharma’s door, too.

She borrowed $126. Under the loan’s terms, she said she would use it to finance a small business — a snack stand she runs with her husband. Many microfinance providers require loans to be used to fund a business.

But Ms. Sharma, a 29-year-old mother of three, acknowledges she lied. “You have to mention a business to get a loan,” she says. “There was no other way to get the money.”

She used it to pay overdue bills and to buy food for her family. Ms. Sharma earns $8 a week, on average, in a factory where she extracts silk thread from cocoons immersed in boiling water.

Over the next four years, she took nine more loans from three different lenders, in progressively larger sums of $209, $272, $335, and $390, according to lending records reviewed by The Wall Street Journal.

A spokesman for BSS Microfinance Private Ltd. of Bangalore, another of her lenders, declined to comment on her borrowing history, citing central-bank privacy rules.

This year, she took another $314 loan to pay for her brother-in-law’s wedding, again saying the money would be used for business purposes.

She also juggled loans from two other microlenders — $115, $167, and $251 from the Bangalore-based lender Ujjivan, and another $230 from Asmitha Microfin Ltd.

Ujjivan confirmed it issued three loans. An Asmitha official said he had a record of a loan to a Ramanagaram resident named Lalitha, but at a different address.

“I understand that it is credit, that you have to pay interest, and your debt grows,” Ms. Sharma says. “But sometimes the problems we have to seem like they can only be solved by taking another loan. One problem solved, another created.”

Many of the problems in Indian microlending might sound familiar to students of the U.S. mortgage crisis, which was worsened by so-called “no-documentation” loans and by commission-paid brokers who critics say lacked an incentive to check borrowers’ ability to repay.

Similarly in India, microlenders’ field officers are often paid on commission, giving them financial incentives to issue more loans, according to Ms. Kamath.

Lenders are aware that applicants often lie on their paperwork, says Ujjivan’s founder, Samit Ghosh. In fact, he says, Ujjivan’s field staffers often know the real story. But his organization maintained a policy of “relying on the information from the customer, rather than our own market intelligence.”

He says that policy will now change because of the trouble in Ramanagaram. The lender will “learn from the situation, so it won’t happen again,” he says.

It’s tough to monitor how borrowers spend their money. Ujjivan used to perform regular “loan utilization checks,” but stopped because it was so costly. Now it only checks in with people borrowing more than $310, Mr. Ghosh says.

BSS checks how loans are being spent a week after disbursing the money, and makes random house visits, according to S. Panchakshari, its operations manager. The company doesn’t have the power to insist that borrowers not take loans from multiple lenders, he said in an email.

Lenders also tend to set up shop where others have already paved the way, causing saturation. There is a “follow-the-herd mentality,” says Mr. Ghosh at Ujjivan. Microlenders “often go into towns where they see one or two others operating. That leaves vast chunks of India underserved, “and then a huge concentration of microfinance in a few areas.”

In Ramanagaram district, seven microfinance lenders serve 22,500 women. (Most microloans go to women because lenders consider them less likely to default than men.) Loans outstanding here total $4.4 million, according to the Association of Karnataka Microfinance Institutions, a group of lenders in Karnataka state.

Lenders in Ramanagaram say the loan-repayment revolt was instigated in part by Muslim clerics who oppose the empowerment of women through microfinance. Most lenders are still servicing loans to Hindu borrowers, but have stopped issuing fresh loans to Muslims.

“We can’t do business with Muslims there right now,” says Mr. Ghosh of Ujjivan. “Nobody wants to take that kind of risk.”

The irony is that, for years, Indian microlenders have touted themselves as bankers to the nation’s impoverished minority Muslim community, which has long been excluded from the formal banking sector.

A 2006 report commissioned by India’s prime minister found that while Muslims represented 13.4% of India’s population, they accounted for only 4.6% of total outstanding loans from public-sector banks.

Islam prohibits the paying of interest, but mosque officials don’t cite that as the reason for the loan-payment strike. They stressed the overindebtedness of the community, and the strains it’s putting on family life.

Ramanagaram’s period of wild borrowing irks some residents, both Hindu and Muslim. Alamelamma, a 28-year-old vegetable seller, says she has benefited from microfinancing and that the profligate borrowers “have ruined it for the rest of us.”

One gully away, Ms. Sharma, the heavy debtor, has a different view: She would like to see the microlenders kicked out of the community entirely. “Not just for now, but forever,” she says.

Rob Copeland contributed to this article.