India has a young and rapidly growing population—a potential demographic dividend. But India needs thriving cities if that dividend is to payout. New MGI research estimates that cities could generate 70 percent of net new jobs created to 2030, produce around 70 percent of Indian GDP, and drive a nearly fourfold increase in per capita incomes across the nation.

Handled well, India can reap significant benefits from urbanization. Surging growth and employment in cities will be a powerful magnet. MGI projections show India’s urban population soaring from 340 million in 2008 to 590 million in 2030.

And this urban expansion will happen at a speed quite unlike anything India has seen before. It took India for nearly 40 years (between 1971 and 2008) for the urban population to rise by nearly 230 million. It will take only half the time to add the next 250 million. 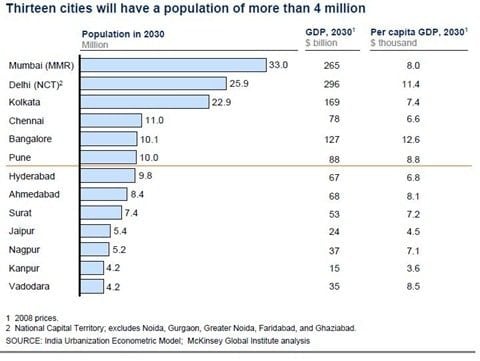 India has the potential to unlock many new growth markets in its cities, many of them not traditionally associated with India including infrastructure, transportation, health care, education, and recreation. MGI projects that to meet urban demand, the economy will have to build between 700 million and 900 million square meters of residential and commercial space a year. 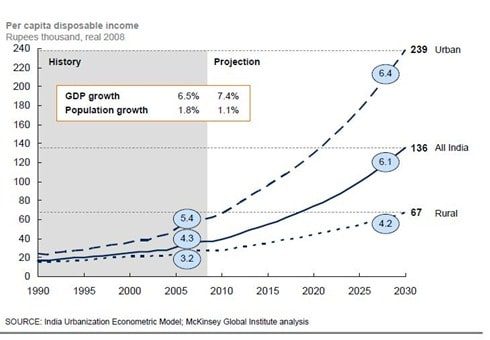 Per Capita Disposable Income in 2030

In transportation, India needs to build 350 to 400 kilometers of metros and subways every year, more than 20 times the capacity building of this type that India has achieved in the past decade. In addition, between 19,000 and 25,000 kilometers of road lanes would need to be built every year (including lanes for bus-based rapid transit systems), nearly equal to the road lanes constructed over the past decade.

Cities can also deliver a higher quality of life. Urban scale benefits mean the cost of delivering basic services is 30 to 40 percent cheaper in concentrated population centers than in sparsely populated areas. But to reap such benefits, India needs to meet an unprecedented policy challenge. If it fails to do so, this could seriously jeopardize its growth and risk high unemployment.

Although urban India has attracted investment on the back of strong growth, its cities are still failing to deliver even a basic standard of living for their residents after years of chronic underinvestment. Unless it steps up investment in its cities, India could well lose the productivity dividend of urban living. Today, in per capita terms, India’s annual capital spending of $17 is only 14 percent of China’s $116 and less than 6 percent of New York’s $292.

MGI estimates that India needs to invest $1.2 trillion just in capital expenditure in its cities over the next 20 years, equivalent to $134 per capita per year, almost eight times the level of spending today. If India taps into five sources of funding used in cities around the world—monetized land assets, higher property taxes, user charges that reflect costs, debt and public-private partnerships, and formula-based government funding—its largest cities could generate as much as 80 percent of the funding they require from internal sources.