Microfinance Americas 100 ranks the top-performing MFIs in South America and measures their performance on the three pillars of outreach, efficiency, and transparency. Each MFI obtains a certain score by combining the indicators that comprise each pillar. 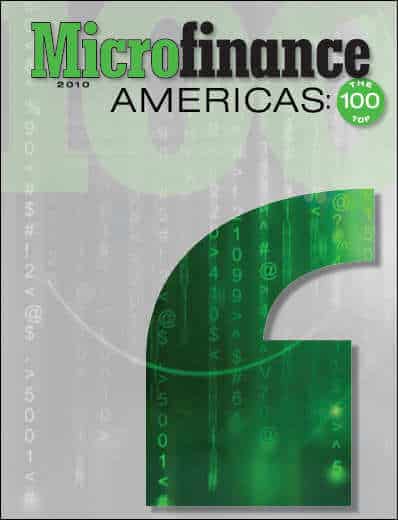 This year’s ranking is particularly noteworthy. It shows that—even in the wake of an international financial crisis—microfinance in Latin America and the Caribbean continues to excel with growing portfolios and acceptable levels of arrears. Of course, quality control happens at a cost: returns on assets of the top 100 institutions have gone down from 2.9 percent in 2008 to 2.2 percent by the end of 2009, due mainly to decreased portfolio incomes and increased reserves. The ranking also shows a marked absence of institutions from Central America primarily because they did not achieve the minimum levels of sustainability required.

In addition to the financial crisis, factors such as the political standoff in Honduras and the No Payment Movement in Nicaragua have adversely affected microfinance operations in Central America. On funding, there has been an increased reliance on deposits as a major source for microfinance. In fact, deposits account for almost 80 percent of portfolio financing for deposit-mobilizing institutions.

The financial crisis coupled with media attention to microfinance profits and overindebtedness also underscores the need for continued improvement to the framework for microfinance performance assessment. While there have been great advances in measuring institutional strength, there has been less emphasis on measuring the positive social effects of microfinance.

The definition of “social performance” is an obvious first issue that needs to be addressed. To contribute to this end, Microfinance Americas 100 summarizes what the Social Performance Task Force (SPTF), an international working group, is offering to the industry in terms of definitions and standards. In fact, 55 of the top 100 institutions now report on these nascent standards. The MIF is proud to support this data collection exercise and, as you will learn from this edition, advance it. This will surely help to improve overall transparency in microfinance.

1. CrediAmigo (Targeted Productive Credit Program operated by Banco do Nordeste do Brasil) moved up five places to lead the ranking, by virtue of its status as the second-largest microenterprise lender in the entire region. It consolidated its position as the institution with the greatest outreach in its specific market, in addition to being an important model for the use of the group lending methodology.

2. Ecuador’s Fundación para el Desarrollo Integral Espoir jumped to second place, registering a remarkable advance over the previous year, by virtue of the results it achieved in the efficiency pillar. It effectively applied the community bank methodology, enabling strong portfolio quality (portfolio at risk > 30 days of 1.1 percent) and efficient operations, spreading its per-loan expenditures (US$89) over its entire client base.

3. Pro Mujer Bolivia (Programas para la Mujer) figures prominently in third place based on its combined results for the outreach and efficiency pillars (with greater emphasis on the latter). In this year’s edition, this MFI stands out as the most successful new entrant in the overall ranking and a member of the top five institutions based on its sustained commitment to information transparency.

4. The next spot in our top five rankings belongs to the Dominican Republic’s Banco ADOPEM, which successfully increased both its lending and deposit operations. It occupies seventh place in the outreach pillar for providing benefits to 25 percent more borrowers than in the previous year and also because its depositors outnumbered its borrowers, illustrating its outreach in microfinance service provision.

5. Closing out the ranking is mammoth Colombia’s Banco Caja Social, which made a remarkable jump in the ranking thanks to its first-place finish in the outreach pillar. This institution’s enormous outreach contributed to its final rank. The emphasis of Banco Caja Social is on providing consumer credit in the country.