Towards the end of 2013, NABARD released its an annual report on the microfinance sector titled ” Status of Microfinance in India 2012-2013 “The pdf report can be downloaded at the link below : 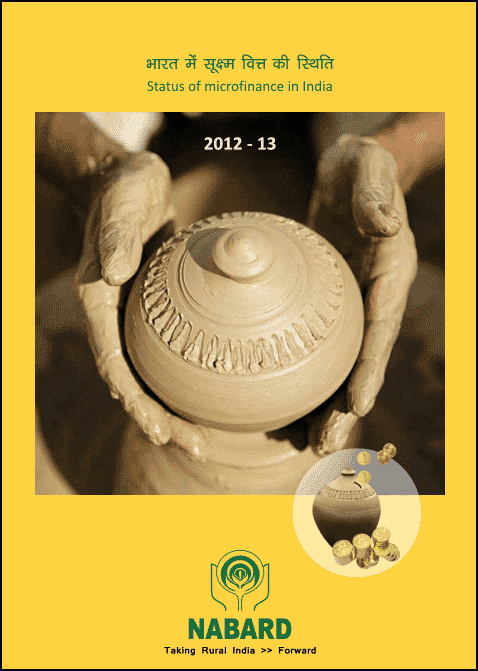 Download the full report on Microfinance in India by NABARD at the link below :

Extracts from the report are presented below :

1.1 The journey so far traversed by the Self Help Group – Bank Linkage Programme (SHG-BLP) crossed many milestones – from linking a pilot of 500 SHGs of rural poor two decades ago to cross 8 million groups a year ago.  Similarly from a total savings corpus of a few thousands of Indian Rupees in the early years to a whopping Rs 27,000 crore today, from a few crores of bank credit to a credit outstanding of Rs 40,000 crore and disbursements touching Rs 20,000 crore during 2012-13. The geographical spread of the movement has also been quite impressive – from an essentially Andhra Pradesh – Karnataka phenomenon in the beginning now spreading to even the most remote corners of India. Over 95 million poor rural households are now part of this world’s largest micro Credit initiative. Unlike similar experiments in other developing countries, the SHG-BLP lay emphasis on regular savings by the members with the savings corpus being used to lend among themselves and as needs arise, later by linking the groups with banks for availing credit. The poor in the country have demonstrated that in-spite of being poor, they are, perhaps, the most “bankable” clients and most willing to help each other for a better tomorrow.

1.2 There have been many success stories of the poor  SHG  members showing exemplary entrepreneurial qualities to come out of the vicious circle of poverty and indebtedness with the help of SHGs. The tremendous impact on the social status of the poor rural women becoming bread earners of their households through the instrument of SHGs has been highly commended by many researchers. The impressive performance under SHG-BLP prompted other developmental agencies like the Government Departments to depend heavily on such groups to take the development efforts forward. A large number of service delivery of the Government Departments are now contracted to SHG members in preference to private contractors largely prompted by their devotion and efficiency.

1.3 While all the stakeholders of this highly successful micro-credit initiative ride on past glory, there are clear signs of the initial excitement turning into pride and then to complacency. The rapid growth of SHG-BLP also led to more aggressive targets – a new set of milestones, often at the cost of quality. When the Government decided to adopt this successful development model for spearheading its poverty alleviation programs, it had to be a big leap – a leap for which the stakeholders were not fully equipped nor was there enough time to prepare the clients for the transformation. The result was an overall dilution in the basic premise of Self Help and group cohesion to achieve the subsidy targets set by the Government. Group formation is increasingly perceived as a means to have access to Government Subsidies and entitlements and thus have serious implications for the future of the movement. This has also led to cases of multiple memberships by members in SHGs, in select cases. Further, the initial emphasis on the graduation of the SHG members through regular savings and internal lendings reinforcing cohesion among the members, before accessing credit from financial institutions in progressive doses, gave away to high doses of credit without waiting for the groups to become cohesive and without linking the quantum with their capacity to utilize and service the loans. The financing banks were also ill-prepared for the sudden spurt in SHG loans and their monitoring and supervision of such loans became less regular (and even totally absent at times!).

1.4 The findings of the two studies taken up by NABARD on NPAs of loans to SHGs by banks bring these structural deficiencies to the fore. The mushrooming of the microFinance Institutions (MFI’s) smelling the “business opportunities” with the poor, also led to an unhealthy trend of more and more credit being pumped without proper appraisal of the loanees and before assessing their capacity to repay. The grave crisis of confidence of MFI’s and subsequent developments has had a highly negative impact on the microcredit initiative in the country.

1.5 Although SHG-BLP was an attempt to bring the “unbanked” poor into the formal banking system and to inculcate among the poor the thrift and credit habits, a natural corollary is for the group members to graduate into seeking more and better livelihood opportunities with access to credit from formal financial institutions. This particular aspect probably did not get the attention it deserved in the past and the result was, as the aspirations of the poor members rose, they were not adequately equipped to seek and adopt better livelihood opportunities or becoming entrepreneurs. A few initiatives by NABARD like demand-based skill training and market linkages of SHGs to rural haat have encouraged the establishment of micro-enterprises by the members of matured SHGs. Even efforts by government programs like the “Kudumbashree” in Kerala state with the assistance of NABARD commenced a land leasing project by small groups of women in Joint Liability Groups (JLGs). There are over 38000 JLGs in Kerala covering 2.5 lakh women cultivating 24,000 ha of land which forms about 9% of the total current fallow of the state2. Thus, government programs like the “Kudumbashree” have also heralded a new beginning of enterprises through group action.

1.6 Though, SHG-BLP is a step towards bringing the “unbanked” poor into the mainstream banking channels, its formal acceptance as a Financial Inclusion (FI) initiative by the Reserve Bank is still awaited. Though several initiatives were taken by the Government of India, the Reserve Bank of India, NABARD, and banks to bring the poor into the fold of formal financial service providers, no serious attempt was made to leverage the SHG-BLP to achieve the FI goals.  In fact, there is a need for SHG-BLP and FI initiative working in a complementary manner, synergizing the strengths and ensuring effective banking footprints in the remotest of hinterlands. A successful program like SHG-BLP which could link millions of rural poor to the formal banking system could have been the main instrument for financial literacy and FI in the country. There is a number of plausible ways by which matured SHGs could have been participants in the FI initiative, including being agents of providing direct banking services to the poor at their doorsteps, as a low cost and efficient alternative. This model is certainly a more cost-effective and reliable alternative to the existing inclusion agenda and millions of households, now members of SHG-BLP would have been the immediate beneficiaries.

1.7 The  SHG-BLP though made impressive progress during the last two decades of its existence, is at an inquisitive juncture now. For the first time since the program was launched two decades ago, the number of SHGs linked to Banks showed a decline during

2012-13. Similarly, fresh loans to SHGs have been near stagnant for the last few years, though it showed a  marginal rise during 2012-13. From an envious record of almost 100% recovery of loans by SHGs, the NPA3  of SHG loans by Banks have reached an alarming high of over 7% of the loans outstanding against them. More painful is the fact that loans to SHGs in the most resource-poor regions in the country reported NPAs of over 10%. Further, as indicated, this potent and effective financial inclusion measure has not received the attention of bankers presently focused on opening individual accounts through BFs/ BCs. However, the solution lies in reinventing the basic principles on which the SHG movement was founded while responding innovatively to financial access and effectiveness through the media of SHGs. The success of SHG-BLP (or FI) will be assessed not on the basis of savings or credit linkage or on social capital leveraged but on the basis of the improvement in the quality of lives of its members.

1.8 Realising the catalyzing role it has played in the growth of SHG-BLP and the need to make the program more relevant for the future, NABARD envisions the following for the ensuing four years:

1.9 No discussions on microfinance in international fora are complete without reference to India’s experience in the Sector. NABARD had been publishing data on microfinance in India every year along with an analysis of the data compiled through various stakeholders like partner NGOs, financial institutions, Government Departments, etc.5  In addition to the analysis of data on the extent of savings harnessed by the SHGs, the credit availed by the groups from banks. The publication also covers the debt sourced by Micro Finance Institutions (MFI’s) across banks, besides highlighting the facilitating role played by NABARD for the sector.

An update on microFinance as of the end of March 2013 is being presented in 3 different sections. The progress under the SHG-Bank linkage program has been covered in the first part, while the extent of debt leveraged by Micro Finance Institutions (MFI’s) from banks etc. have been covered in the second part. Various innovative initiatives and support services like the capacity building of all stakeholders of the micro Finance program forms the final part. More detailed statistical information on the progress of these activities has been presented at the end of the report. The report also covers the district-wise coverage of SHGs (savings linked) across the country. The SHG coverage has been mapped against the potential available. The report also presents fact sheets of 10 priority states to facilitate strategic planning by stakeholders for the expansion of the program.

Download the full report on Microfinance in India by NABARD at the link below :

Contents of Status of Microfinance in India Report 2013

HIGHLIGHTS OF THE SHG-BANK LINKAGE PROGRAMME 2012-13

Ranbir Kapoor has played a range of roles during his…

The craze of Bollywood stars may come and go but…

Ranbir Kapoor has played a range of roles during his career and without any doubt; he…