The Reserve Bank of India announced today that it has granted provisional “in principle licenses” to ten different financial entities to launch payment banks in India called Small Finance Banks. Out of the ten companies granted small finance bank licenses, 8 operate in the microfinance sector. 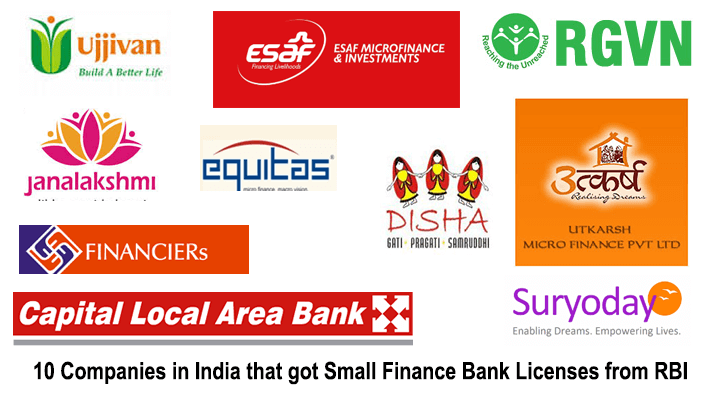 The approval granted today is valid for 18 months during which the selected applicants are required to comply with the minimum capital requirements, foreign shareholding, scope of activities, and other guidelines as announced by the RBI last year.

A Jaipur based NBFC which currently provides financing for cars and heavy vehicles in the state of Rajasthan.

A Jalandhar based Local Area Bank having operations in the state of Punjab.

An MFI headquartered in Ahmedabad and having microfinance operations predominantly in the West of India. Learn more about Disha Microfin.

A diversified microfinance company with headquarters in Chennai and having operations in microfinance and micro-housing loans. Learn more about Equitas holdings.

The Kerala focused MFI has it’s headquarters in Chennai and has done pioneering work in the state of Tamil Nadu. Learn more about ESAF Microfinance.

Headquartered in Bangalore, Janalakshmi is one of India’s largest microfinance companies.

It is an MFI based in North East India with its headquarters in  Guwahati, Assam. Learn more about RGVN.

It is an MFI based in Mumbai with operations in Maharashtra, Gujarat, and Orissa. Learn more about Suryoday Microfinance.

A Bangalore based MFI and one of the first microfinance companies to scale up operations in urban India. Learn more about Ujjivan.

Headquarters in Varanasi and operations spread across the states of Uttar Pradesh. Learn more about Utkarsh Microfinance.

None of the companies granted new licenses are currently listed on the stock exchanges of India. India’s first microfinance company that went public, SKS microfinance has been denied a license despite being one of the early applicants.

Small Finance Banks is a new category of Banks announced by the RBI in July 2014, when the draft guidelines for small finance banks was made public.  By February 2015, RBI had received applications from 72 applicants and an external advisory committee headed by Usha Thorat was constituted to evaluate the applicants. The 10 companies that received licenses today come from this group of applicants. It is expected that RBI will grant licenses to more companies in the coming weeks and applications will henceforth be evaluated on a rolling basis.

Small Finance Banks licenses are more restrictive than a regular bank license, such as one given to State Bank of India (SBI) or ICICI Bank. While small finance banks can undertake fundamental banking activities such as deposit-taking and lending, they are not allowed to set up subsidiaries. Also, the loan ticket size is much smaller in Small Finance Banks compared to regular banks. RBI has mandated that the activities of promoters of small finance banks should not be mixed with banking operations.

The apex association of microfinance companies in India, MFIN has played a very crucial role in ensuring that the NBFC-MFIs have a level playing field through its continuous engagement with the RBI. It was through sustained efforts of MFIN and MFI-NBFC’s that RBI opened up its small finance bank application process to MFI’s who had pan-India operations as against those which operated only in one state and two contiguous districts.

MFIN also played a crucial role in the renaming of Small Banks as Small Finance Banks. The essence being, that it’s not the Bank that should be small but the loan amount, which addresses a large unmet need of the micro-enterprise sector.