Microfinance [MF] broadly envisions a world in which low-income, poor and the poorest households have permanent and reliable access to a range of better quality financial services at affordable prices to finance their income-generating activities, build assets, smoothen consumption and protect against risks. A harsh aspect of poverty is that income is often irregular and undependable. Access to micro-credit helps poor smoothen cash flows and avoid periods when access to food, clothing, shelter, or education is lost. Micro-credit makes it easier to manage shocks like sickness, emergencies, natural disasters, etc. When women participate in the MF program they are self-empowered to make informed decisions in their family and social life. In developing countries, clients’ demand confirms that poor people value MF services. 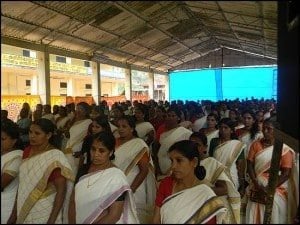 Banks in India have been providing micro-credit through a credit delivery model, viz. SHG-Bank Linkage Program [SBLP] since 1992.Since 2000-01 bank credit has fueled the significant and rapid growth of SHGs including Government program “ Swarnjayanti Gram RozgarYojana[SGSY] and covering a large number of women as on end-March 2012. However, the unsatisfactory recovery performance of banks’ loan to SHGs in the past few years resulted in Non-Performing Assets [NPA] and decelerated growth. This paper attempts to analyze agency-wide and region-wise banks’ performance under the SBLP as on end-March 2012 in all its aspects including exclusive women SHGs, NPAs and suggests a strategy to accelerate growth and contain NPAs.

Aggregate performance as on end-March 2012 is as under:

6. According to NABARD, SHGs have mobilized estimated savings of over Rs.22,000crore of which nearly 70% [Rs.15,400 crore] was used for internal lending. During 2011-12 alone, 11.48 lakh SHGs availed a loan of Rs.16,534.77crore from Banks and as on end-March, 2012, 43.54 lakh SHGs had outstanding credit of Rs.36,340 crore. Thus, the total pooled resources outstanding at members’ level would be Rs.51,740crore. Credit availed by SHGs along with their internal savings is revolved many times within the groups for shorter durations which makes the multiplier effect larger than the figures reported by banks.

Commercial Banks shared 63.4% of savings amount of SHGs but their share in loan disbursement to SHGs was 60.1%, whereas RRBs with a share of only 19.8% in saving amount accounted for 30.4% of loan disbursement during 2011-12.

Number of SHGs with loans outstanding as a percentage to a number of savings SHGs accounted for 60.8% for RRBs followed by commercial banks[56.7%] and cooperatives[36.5%] with a mean value of 54.7%.

Loan amount outstanding as a percentage to savings amount was 662% for RRBs followed by commercial banks [621%] and cooperatives [174%] with a mean value of 555%. However, number of SHGs financed and loan amount disbursed in 2011-12 as a percentage of the number of SHGs and outstanding loan amount was the highest for cooperatives at 54.6% and 81.8% respectively whereas it was the lowest for commercial banks at 22.9% and 38.5% respectively as compared with a mean value of 26.4% and 45.5% respectively.

The loan amount outstanding as a percentage of savings for RRBs was the highest [712%] and for cooperatives the lowest [184%] as compared to mean value [597%].

During 2011-12, the number of women SHGs financed as a percentage of an outstanding number of women SHGs was the highest [42.1%] for cooperatives and the lowest [23.3%] for commercial banks as compared with mean value [25.3%]. However, the loan amount disbursed as a percentage of the outstanding loan amount was the lowest [13.1%] for cooperatives and the highest [62.0%] for RRBs with a mean value [46.6%].

Percentage of NPAs to outstanding loans during the period progressively increased in the case of public sector banks and RRBs whereas for private banks and cooperatives they increased substantially in the year 2011 and then declined in 2012. Public sector banks NPAs were the lowest [2.60%] in 2010 which, however, had the highest [6.48%] barring cooperatives [6.84%] in 2012.

Between 2010 and 2012 NPAs as a percentage to outstanding loans progressively increased in Eastern, Central, Western and Southern regions whereas in the other two regions they increased in the following year and then declined. The southern region had relatively the lowest NPA percentage among six regions whereas the Central region had the highest NPAs followed by Western and Eastern regions.

Cooperatives and public sector banks had 6.84% and 6.48% of gross NPAs to loan amount outstanding whereas private banks and RRBs had 5.30% and 4.95% respectively as compared with mean value [6.09%].

Group formation: SHGs are village-based, economically and socially homogeneous groups of people who come together voluntarily to pool their small savings and use them initially for micro-lending among members of the group. Once the members of the group are able to establish and demonstrate a group discipline, financial discipline, regular thrift and credit cycle with most satisfactory recovery rate on time, they are linked with banks. Of late, this group formation and the nurturing process are significantly diluted. Banks adopting SHG-models should, therefore, engage themselves in capacity building and empowerment of SHGs and bring cohesiveness and a sense of purpose among SHGs. They can improve the efficiency of NGOs in promoting and nurturing SHGs. Bank’s proactive role accompanied by requisite resources and professional inputs would help members of SHGs better understand the underlying principles of SHG formation, group discipline, financial discipline, etc. before linking to banks which is critical to recycle credit without interruption. This helps in minimizing incidence of defaults, over-borrowing and multiple borrowing.

Loans for non-income generation cannot help borrowers repay high-cost loans but add financial burden and increases the rate of delinquency. Even loans issued for income-generation are for six months with weekly repayments and without a moratorium period that cannot help borrowers repay loans and high interest on time. Most microfinance loans should, therefore, be for income-generating activities to enable borrowers to acquire income-generating assets and supported by adequate working capital and moratorium period. The government should create Institutional infrastructure to help microfinance-clients generate additional income, which is adequate to repay loan and interest and provide some surplus to eke out a reasonable living and ultimately reduce dependence on the money lenders. Banks should, based on field studies, develop loan products considering duration, frequency of repayment, moratorium and supported by adequate working capital.

Reduction in interest Rate:  Banks have easy access to lower cost of funds that can help them acquire significantly a larger share of the market and provide effective competition to MFIs. This could result in a general reduction in the interest rates for borrowers.

Penetration: It is necessary to measure district-wise and State-wise the share of microfinance clients in the total poor population in the district and State.

To integrate extension of micro-credit with the Government’s other social development programs to significantly improve the quality of life of MF clients.

Financial literacy and debt counseling: RBI’s comprehensive guide on financial literacy and debt counseling will go a long way in accelerating growth with quality of MF portfolio since it addresses specific issues viz. creating financial awareness among members of SHGs, educating them on money management, the importance of savings with banks and availing other financial services including bank loan products, timely repayment of a loan with interest, restructuring of debt, etc.

Micro-finance Bank: While Government is initiating steps to establish Women’s Bank as a public sector bank to lend mostly to women and women-run businesses, support women SHGs and women’s livelihood, employs predominantly women, and address gender-related aspects of empowerment and financial inclusion, it is necessary to establish Microfinance Bank in the public sector as is in some countries of Asia and Africa.

RBI’s directives: Bank’s MF portfolio would significantly improve by strictly complying with RBI’s mandatory guidelines to MFIs effective from April, 2011in respect of treating bank credit as priority sector credit, amount and nature of qualifying assets, margin and interest cap, loan size, purpose, repayment period, components of loan pricing, among others.RBI has issued an instruction which stipulates that each bank is required to have a robust mechanism for early detection of signs of distress, including prompt restructuring in the case of all viable accounts; to have a loan recovery policy which sets down the manner of recovery dues and targeted level of reduction,

To strengthen the comfort and confidence in financing SHGs, NABARD has suggested a few risk mitigation mechanisms, viz; self-rating tools by SHGs and conduct of audits at SHG level. The self-rating mechanism by SHGs is intended to educate SHG members for capitalizing on their strengths and minimizing weakness in SHG’s functioning and initiating corrective action on time. To ensure that the financial discipline is maintained between the SHGand the banks, banks may insist on servicing of interest at monthly rests. Besides servicing interest, the bank may also introduce appropriate prudent mechanisms for review and continuance of limit by ensuring that all or part of the principal drawals is repaid in an operational year. Similar to approaches applicable in KCC, the bank could insist that every drawal be repaid within twelve months from the date of drawal or insist for turnover of at least 25-30% of the principal drawn in the first half of the year while reviewing the operations of the credit limit

Evaluation: NABARD study of 214 SHGs linked to banks before March 2000 in 108 villages of nine districts in four States [Andhra Pradesh, Karnataka, Orissa and Rajasthan] revealed that 50% women members of SHGs [for more than seven years or more] were poor, including 13% very poor. This suggests the need for evaluating district-wise SHGs completing three years on an annual basis so as to assess poverty penetration and impact in respect of the increase in asset creation, average annual net income, savings, employment generated per household, repayment performance, reduction in availing multiple loans and loans from informal sources with higher interest rates, degree of social empowerment of women in terms of self-confidence, participation in decision-making in matters related to family welfare, economic activities etc.