FORMATION OF AN NGO AS A SECTION 25 COMPANY

NGOs can be registered as limited companies under section 25 of the Companies Act, 1956 for carrying out charitable and promotional activities.

A company registered under the Companies Act, 1956 (the Act) with the liability of its members limited by guarantee and the one licensed under section 25 of the Act is a better choice so far as a legal form of organization is concerned in such cases. Section 25 also empowers the Central Government to exempt such a company from specific provisions of the Act.

Further, if such a company is registered as a private company as defined in section 3 (i) (iii) of the Act (except regarding the restriction on the right of the members to transfer their shares since there may not be any shares), it will enjoy privileges and exemptions enjoyed by a private company.

Power of the Central Government to Grant Licence

The Central Government is empowered to grant licenses to association/companies which intend to promote commerce, art, science, religion, charity or any other useful subject and which intend to apply their profits if any or other income on promoting their objects and to prohibit the payment of any dividend to their members.

The associations which are granted such license are allowed to be registered as companies with limited liability without the addition to their name the words “Limited” or “Private Limited”. They are eligible for exemption from some of the provisions of the Companies Act, 1956. 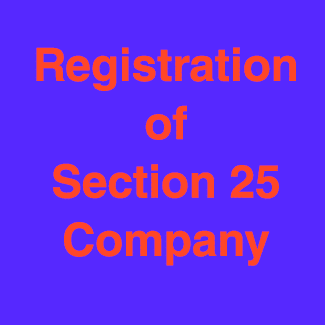 CONDITIONS FOR GRANT OF LICENCE [SECTION 25 (1)]

In order to obtain the status contemplated u/s. 25, the promoters or the company must prove to the satisfaction of the central Government that:

a. an association is about to be formed as a limited company for promoting commerce, art, science, religion, charity or any other useful object; and

b. the association intents to apply its profits, if any, or other income in promoting its objects, and

c. The payment of dividends to its members is prohibited.

A copy of the application with all enclosures and accompanying papers should be sent to the Registrar of Companies of the State where the company proposes to situate its Head Office/Registered office.

The power under section 25 has been delegated to the Regional Directors at Mumbai, Kolkata, Kanpur, and Chennai. Accordingly, the application for grant of permission under the section shall be made to the concerned Regional Director in conformity with the procedure laid down in the Companies Regulations. 1956. No form has been prescribed for making the application. The application may be made in the form of a letter. The said covering letter should accompany the following-

i. Name availability letter from the Registrar of the State in which it wants to get the Association or Club registered (in case of a company to be registered newly)

iii. List of names, addresses, descriptions, and occupation of the promoters in three copies.

iv. List of companies, associations, and other institutions in which promoters of applicant company are directors or hold responsible positions, with a description of positions held.

v. List of members of the proposed Board of Directors in three copies

vi. Declaration in the prescribed form signed by:

a) an advocate of Supreme Court or of High Court, or

b) an attorney or pleader entitled to appear before the High Court, or

vii. Copies of accounts, balance sheet, and reports on working of association for the last two financial years (for one year only if the association has functioned for less than two years) in triplicate.

viii. A Statement of assets and liabilities of the association as on the date of the application or within seven days of that date.

ix. Sources of income of the proposed company and estimate of annual income and expenditure.

x. A note on works already done by the association and works proposed to be done after being registered u/s 25.

xii. Declaration by each of the promoters making the application.

Note: These documents are to be submitted in triplicate.

Within a week from the date of making an application to the Regional Director, an advertisement must be published in the proforma given in Annexure-II to the Regulations or in a form as near thereto as circumstances admit. The advertisement shall be published at least once in a newspaper in the principal language of the District in which the proposed registered office would be situated and circulating in that District. It shall also be published at least once in an English newspaper circulating in that District.

A certified copy of the notice as published in the newspaper must be sent forthwith to the Regional Director.

Note: All the forms, declarations, affidavits, covering letters, etc. referred to above have been provided in our Practical Guidance Booklet titled “GB-02 Formation & Registration of Societies, Associations, and Clubs (
Including Formation of Companies u/s 25 of the Companies Act, 1956)”.

The application for registration of a Section 25 company should be accompanied by a draft for Rs. 500/- drawn in favor of “pay &Accounts Officer, Department of Company Affairs”. The fee may be paid through a treasury challan paid at specified branches of Punjab National Bank.

A fee of Rs. 30/- is payable if the association has no share capital and the number of its member does not exceed twenty.

Company Formation after Getting Licence

After receipt of the necessary approval under section 25, the approved memorandum and articles should be got printed and stamped as per the stamp duty applicable in the particular state. Thereafter they should be filed with the Registrar along with Form No. 1, Form No. 18, and Form No. 32 for incorporation along with a registration fee of Rs. 50 and filing fee of Rs. 50 per document i.e Form No. 1,18,32 etc. The Registrar then issues a certificate of incorporation to the association or club. For filing of the documents with the Registrar for the purpose of registration of Company please refer to our article “How to Form a Private/Public Limited Company”.

The above article provides required information about the procedure to be followed for Section 25 Company Formation, Please go through the checklist and contact us if you require additional information.