Incorporated as Satin Leasing and Finance Pvt Ltd in October 1990, the company provided credit to shopkeepers and petty traders in the urban markets of Delhi. The company became public in 1994 and is listed in Delhi, Jaipur, and Ludhiana Stock Exchanges.

In 2000, the company was renamed as Satin Creditcare Network Ltd (Satin). In 2008, the company commenced its microfinance operations by providing unsecured loans to poor women in villages or small towns. Satin is one of the leading MFIs in northern India with a loan portfolio of Rs.736 crore as of September 30, 2013.

The company focuses on diversifying its operations across geographies and was present in 10 states as on March 31, 2013.

1. The portfolio outstanding and borrower base have grown at a CAGR of 51 and 43 percent respectively during the 3 years ended March 31, 2013. The portfolio is spread across 10 states

2. Portfolio performance has been good with 30+ dpd of less than 1 percent over the past four years

3. Resource profile is fairly diversified; portfolio securitization and non-convertible debentures accounted for nearly 18 and 10 percent respectively of the company’s overall borrowings as on March 31, 2013

4. Capitalization though adequate for the current scale of operations needs to be strengthened. Gearing increased to over 7 times as on September 30, 2013, from nearly 3 times as on March 31, 2011

5. Profitability is modest though improving. Its return on managed assets improved to nearly 0.6 percent during 2012-13 from around 0.4 percent during 2011-12. However, the ability to improve its profitability over the medium term while reducing the margin to comply with revised regulations will be critical 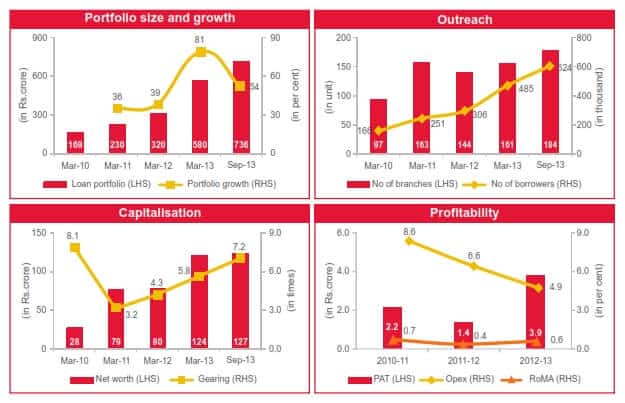