Given below is the procedure for registration of your Trust under sections 11&12 of the Income Tax Act, 1961

i. The newly introduced provisions of section 12AA of the Act provides for a procedure to be followed for grant of registration to a trust or institution.

iii. However, where an application for registration is made after the expiry of the aforesaid period, the provisions of sections 11 and 12 will apply from the date of the creation of the trust or the establishment of the institution if the Commissioner is, for reasons to be recorded in writing, is satisfied that the person in receipt of the income was prevented from making the application within the aforesaid period for sufficient reasons. If the Commissioner is not so satisfied, the provisions of sections 11 and 12 will apply from 1st day of the financial year in which the application is made. 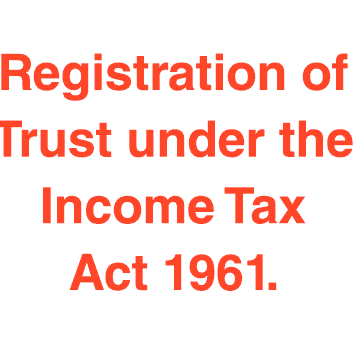 iv. Along with Form no. 10A (in duplicate), file the original (or certified copy of) Trust Deed, together with one copy thereof, under which the trust is set up (original copy of the deed if filed shall be returned).

v. Two copies of accounts (i.e. Balance Sheet, Income & Expenditure A/C., and Receipts & Payment A/c.) for the years, prior to the financial year in which application is made, are also to be filed along with application (if applicable). It should be noted that here, only the copies of accounts of the trust since its inception or during the last three years, whichever is less, are required to be filled.

vi. The Commissioner shall call for documents and information and hold inquiries regarding the genuineness of the Trust or Institution. After he is satisfied with the charitable or religious nature of the objects and genuineness of the activities of the trust or institution, he will pass an order granting registration and if he is not so satisfied, he will pass an order refusing registration subject to the condition that an opportunity of being heard shall be provided to the applicant before an order of refusal to grant registration is passed by the Chief Commissioner or Commissioner and the reasons for refusal of registration shall be mentioned in such order.

vii. With effect from June 01, 1999, an order on an application for registration of a trust or institution is to be made by the Commissioner only and not by the Chief Commissioner. However, in case of trust falls under the jurisdiction of an income tax authority having its headquarters at Mumbai, Chennai, Kolkata or Delhi, the application is to be made to the Director of Income Tax (Exemptions).

viii. The order granting or refusing registration has to be passed within six months from the end of the month in which the application for registration is received by the Commissioner and a copy of such order shall be sent to all the applicants. The order is effective until withdrawn.

ix. It is also provided that the grant of registration shall be one of the conditions for grant of income-tax exemption u/s. 11 & 12 of the Income Tax Act, 1961.

x. The Taxation Laws (Amendment) Act, 2006 has modified conditions as to registration of trust by amending section 12A providing that the accounts of the trust or institution for that year should be audited by a chartered accountant where the total income of the trust or institution as computed under this Act without giving effect to the provisions of section 11 and 12 exceeds the maximum amount which is not chargeable to income-tax in any previous year and such audit report is furnished along with the return of income for the relevant assessment year with effect from the 1st day of April 2006.