Select a Suitable Name of the Society

a) The name of the societies may end with the word ‘trust’.

b) The name of society should be such as does not attract the provisions of the Emblems & Names (Prevention of Improper Use) Act. 1950.

c) The proposed name should not suggest or be calculated to suggest the patronage of the Government of India or connection with the local authority or any corporation or body constituted by the Government under any law for the time being in force.

d) Any name, emblem, official seals, colorable imitation thereof as specified in Emblems and Names (Prevention of Improper Use) Act, 1950 should not be used without prior permission of the Government.

e) If it is proposed to give all Indian characters to the society and words “all India’ or “Akhil Bhartiya” are to form part of the name, the society must have its constituents in at least different states of the Indian union.

f) Words ‘cooperative’, ‘land development’, ‘Reserve Bank’ ‘Union’ ‘State’ ‘Gandhi’ or any other word expressing or implying the sanction, approval or patronage of the Central or any State Government and ‘Municipal’, or ‘Chartered’ or any word which suggests or is calculated to suggest a connection with any municipality or other legal authority may not be used without the previous sanction in writing of such authority.

The subscribers of the memorandum of association may be guided by the above provisions while selecting a name for the proposed society. The Registrar has the power to refuse registration if the name is inconsistent with these guidelines. 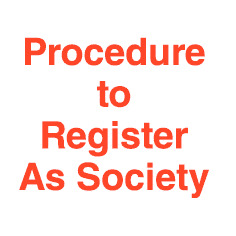 PROCEDURE FOR REGISTRATION OF A NGO AS SOCIETY

Decide the Address of the Registered Office of the society

The principal Act of 1860 does not require mentioning the address of the registered office in the Memorandum of Association of the society.

It is always better to mention the address of the Registered Office in the Memorandum so that communications and notices may be sent to the society at such an address.