In India, the Planning Commission is the premier agency for conducting research and analysis on the poverty data and statistics and presenting these to the public. It is a fact that this is a controversial issue with many government ministries keen to manipulate this data to exaggerate the success of their poverty eradication schemes.

The Planning Commission of India periodically estimates poverty lines and poverty ratios for each year for which Large Sample Surveys on Household Consumer Expenditure have been conducted by the National Sample Survey Office (NSSO) of the Ministry of Statistics and Programme Implementation.

Normally these surveys are conducted on a quinquennial basis (Every 5 years). However the last quinquennial survey in this series was conducted in 2009-10 (NSS 66th round), since 2009-10 was not a normal year because of a severe drought in India, the NSSO repeated the large scale survey in 2011-12 (NSS 68th round).

The summary results of this survey were released in June 2013 and are now available for download below in pdf format. This is the latest and most up to date poverty statistics in India and will have to be used until the next NSSO survey on poverty which is scheduled for 2014 – 2015. 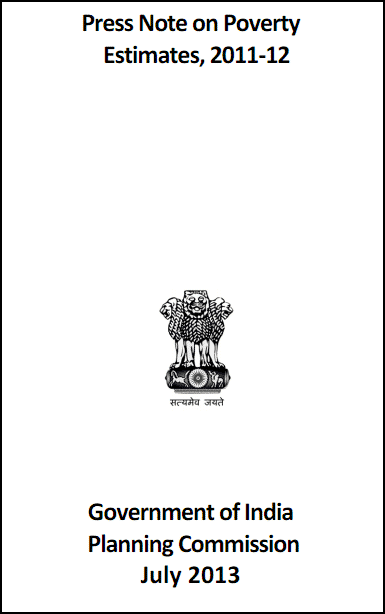