When the Pradhan Mantri Jan Dhan Yojana (PMJDY) was launched in the last week of August 2014, nobody had anticipated that it would become so popular with the masses in such a short time.

Owning to the large scale roll-out of the scheme and a large number of participating banks, there has been some confusion regarding the terms and conditions governing bank accounts opened under the PMJDY scheme among the public.

We are posting the most commonly asked questions about Jan Dhan Yojana for the benefit of our readers below, please go through them and let us know if you have any more additional questions in the comments section. 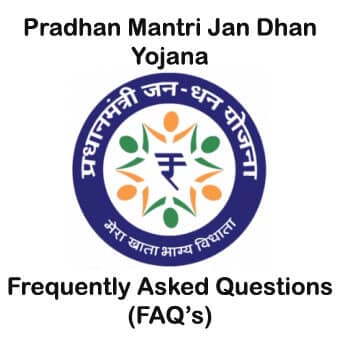 Q. What is PMJDY

A. PMJDY stands for Pradhan Mantri Jan Dhan Yojana. It is the name of the national mission on Financial Inclusion launched by Prime Minister Narendra Modi on 15th August which aims to provide access to banking, savings, remittances, micro pensions, insurance and other financial services to all eligible Indians in a cost-effective manner by 2018. The first phase of these schemes will last till August 14, 2015, and will involve the opening of Savings Accounts for those who have no bank accounts and the issuing of Rupay Debit Cards.

Q. What type of bank accounts can be opened in PMJDY?

A. PMJDY is meant for opening savings bank accounts. The savings bank accounts opened will come under a new category of accounts called “Basic Savings Bank Deposit Account ” or (BSBDA). The features of this type of Bank accounts have been determined by the RBI in August 2012. You can read the full notification online about the terms and conditions governing these accounts. New customers are also eligible to open Joint Accounts under Pradhan Mantri Jan Dhan Yojana.

Q. Who can open accounts? Are there any restrictions on age and income for opening accounts under PMJDY?

A. Any Indian Citizen above the age of 10 years is eligible to open an account under PMJDY.

Q. What about existing Bank account holders, can they open bank accounts under PMJDY?

Q. What is the benefit of Rupay Cards and how can it be used?

A. Rupay cards are like debit cards and can be used to withdraw cash from ATMs and make payments at shops and business establishments. The Rupay Card is linked to your accident insurance and medical insurance and you will be eligible to receive the benefits only if you keep your account active by regularly transacting on the Rupay Card.

Q. Is there any Fee to pay to the bank for opening an account under PMJDY?

A.No fee can be charged by the bank to open an account under PMJDY, if users have been asked to pay a fee, they should report this matter to their nearest RBI Banking Ombudsman.

Q. What will the interest rates on Savings and Overdraft given for accounts under Jan Dhan Yojana?

A. Most public and private banks in India pay an annual interest rate of 4% on the amount deposited in Savings Bank Accounts. The overdraft facility is expected to charge 12% interest on loans given.

Q. How to get Cheque Books?

A. Cheque books are not issued for Basic Savings Bank Deposit Accounts, those account holders who want to avail cheque book facility can do so by maintaining an average quarterly bank balance in their accounts.