With the launch of the Pradhan Mantri Jan Dhan Yojna (PMJDY), banks around the country have started rolling out the red carpet and have begun conducting enrollment camps for the opening of new Savings Bank Accounts (SB Accounts) around the country.

The Phase-1 of Pradhanmantri Jan Dhan Yojna begins on the 28th August 2014 and will last until 14th August 2015, the first phase will be focused on opening a bank account and providing credit facilities for those who are outside the banking system in urban and rural India.

Prime Minister Shri Narendra Modi is expected to launch the scheme in Delhi on August 28th and his speech delivered on the occasion will be telecast live to 76 centers around the country, where enrollment camps are expected to be held.

Bankers have already set an ambitious target of opening at least 1 Lakh savings account on the launch day and many banks have already commenced enrollment camps around the country. Union, State and District level ministers, government officials will be present at these centers and are expected to hand over the Cheque-books and Pass-books to new customers. 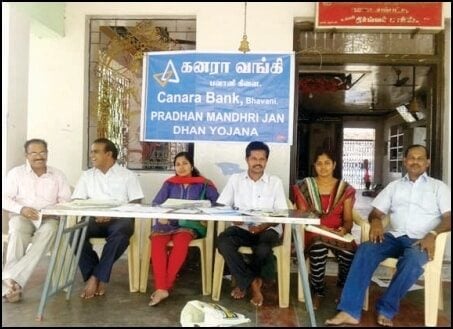 Canara Bank, for instance, has already organized more than two dozen enrollment camps in different districts of Karnataka, Kerala, Tamil Nadu and Punjab where it has a strong branch network in the past week. Other Banks like IDBI Bank have announced an ambitious target of opening 2 Lakh Savings account under PMJDY.

To open a savings bank account at a public sector bank you require many formalities like the presence of an Introducer who already has a bank account in that branch, all these conditions are expected to be waived off at the enrollment camps making it easier for new customers to open a bank account.

Do you need an ID for opening Bank Account?

In June 2014, the Reserve Bank of India simplified the KYC Norms for opening a Bank Account making it easy to open a Savings Bank Account. All you need is one documentary proof of address (current or permanent) to open a Bank Account. However, if you open your bank account by using your Aadhar Unique Id, it will be easier to avail of the overdraft facilities six months down the line. An Aadhar ID is mandatory for availing overdraft facilities in your savings bank account.

It is expected that more than 60,000 enrollment camps will be held in rural and urban areas of the country to open new bank accounts in the coming weeks. The idea behind this massive mobilization is to generate a buzz around the whole scheme so that people eventually start demanding a bank account.

Will the Hype Sustain?

Some experts fear that all the hype surrounding the scheme will attract fly by night operators who already have a Savings Account but will open a new bank account with an eye on availing the overdraft of Rs 5000. Once they avail the overdraft many of them might cease to operate the bank accounts adding to the large number of inactive no-frills savings accounts opened during the previous government’s financial inclusion drive.