NGO Formation as a Society

Society can be described as an association of persons united together by mutual consent to act jointly for some common purpose.

The provisions of the Societies Registration Act, 1860 aim at improving the legal conditions of societies established for the promotion of literature, science, or fine arts or for the diffusion of useful knowledge or for charitable purposes. 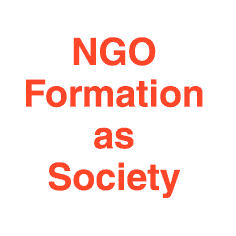 WHO CAN FORM A SOCIETY?

Society can be formed by a minimum of seven or more persons, eligible to enter into a contract including the following:

i. foreigners, even if all the subscribers are foreigners

Why Registration of Society is Recommended?

The registration gives the society a legal status and is essential for:

ii. obtaining registration and approvals under the Income-Tax Act,

iii. lawful vesting of properties of societies, and

iv. recognition to the society at all forums and before all authorities.

v. A suit can be filed by or against a registered society:

a) in the name of certain office bearers or trustees, as provided by the rules and regulation of the society, or

b) in the name of such persons as may be appointed by the governing body of the society.

In the absence of registration, the society has no legal status and, therefore, it cannot sue or be sued.

Governing Body of the Society

The members of the governing body are either elected or nominated as per the rules and regulations of the society.