Formation and Registration of anÂ NGO in India 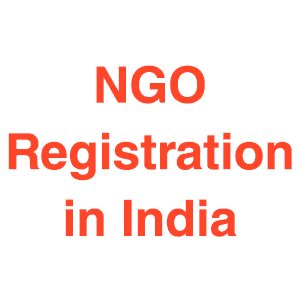 A nongovernmental organization (NGO) may be formed and registered as:

i. Trust: As a public charitable trust. A public trust, whether relating to movable or immovable property, may be created by mere delivery of possession with a direction that the property is to be held under trust. However, a written instrument of trust signed by the author and registered is always desirable.

ii. Society: Section 20 of the Societies Registration Act lays down that charitable societies and societies established for the promotion of science, literature of the fine arts may be registered under that Act. A society registered under the said Act is a legal entity apart from its members and under section 6 of the said Act, it can sue or be sued in the name of its President, Chairman, Secretary or members of the governing body of Trustees. In Secretary of State India v. Radha Swami Satsangh, it was held by the Bombay High Court that the registration of a charity under the Societies Registration Act 1860 was a prima facie evidence of the valid dedication of property for charitable purposes.

iii. Company: An association may be registered under Section 25 of the Companies Act, 1956 if the Central Government is satisfied that it is about to be formed as a limited company for promoting commerce, are, science, religion, charity, or any other useful object and it intends to apply its profits, if any, or other income in promoting its objects and to prohibit the payment of any dividend to its members. In such cases, the Central Government may by license direct that the association may be registered as a company with limited liability without the addition to its name of the word â€śLimitedâ€ť or the words â€śPrivate Limitedâ€ť.

Time is the ultimate luxury. In this busy and intrusive world, peopleâ€™s lives are full of