August 8, 2020
Reading time: 7 minutes
Written By ADITYA
Experienced Entrepreneur with a demonstrated history of working in the internet industry. 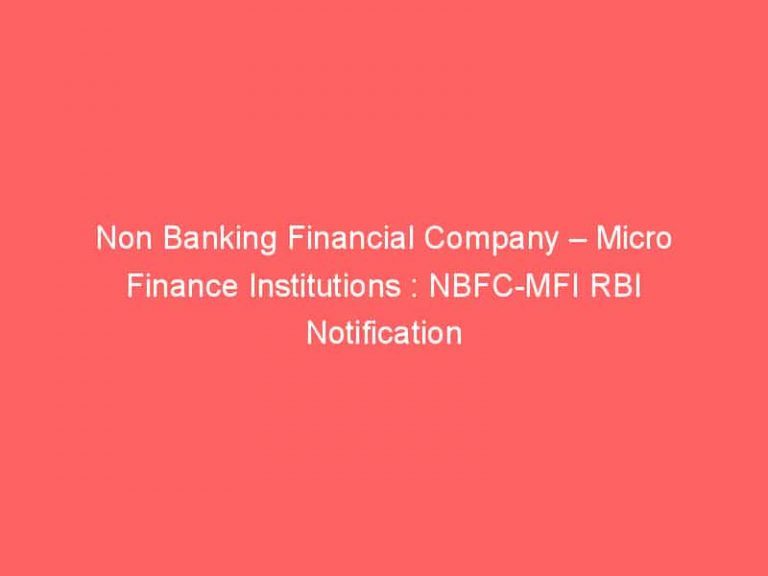 The Reserve Bank of India today released a notification that approves the creation of a new category of Non-Banking Finance Companies (NBFC) called NBFC-MFI. The minimum net owned funds for an NBFC to qualify as an NBFC-MFI will be Rs 5 crore.

A partial part of the notification containing the important details required to become an NBFC-MFI as issued by RBI is given below :

As indicated in the Second Quarter Review of Monetary Policy in November 2010, a Sub-Committee of the Central Board of the Reserve Bank (Chairman: Shri Y. H. Malegam) was constituted to study issues and concerns in the MFI sector. The Committee submitted its report in January 2011. In the Monetary Policy Statement 2011-12, it was announced that the broad framework of regulations recommended by the Committee has been accepted by the Bank.

2. Creation of a Separate Category of NBFC-MFI

It has been decided to create a separate category of NBFCs viz; Non-Banking Financial Company-Micro Finance Institution (NBFC-MFI).   Consequently, there would be the following categories of NBFCs:

3. The Sub-Committee had recommended a role for industry associations in the monitoring of compliance by NBFC-MFIs with the regulations. Separate guidelines in this regard will follow.

The Reserve Bank of India has considered it necessary in the public interest and being satisfied that for the purpose of enabling the Bank to regulate the credit system to the advantage of the country, it is necessary to give the directions set out below, hereby, in the exercise of the powers conferred by sections 45JA, 45K,  45L and 45M of the Reserve Bank of India Act, 1934 (2 of 1934), and of all the powers enabling it in this behalf, hereby gives the Directions hereinafter specified.

1. Short title and commencement of the Directions

i. These Directions shall be known as the Non-Banking Financial Company -Micro Finance Institutions (Reserve Bank) Directions, 2011.

ii. These Directions shall come into force with immediate effect.

2.  The extent of the Directions

These Directions shall apply to every Non-Banking Financial Company-Micro Finance Institution (NBFC-MFI) as defined in these Directions.

An NBFC-MFI is defined as a non-deposit taking NBFC(other than a company licensed under Section 25 of the Indian Companies Act, 1956) that fulfills the following conditions:

i. Minimum Net Owned Funds of Rs.5 crore. (For NBFC-MFIs registered in the North Eastern Region of the country, the minimum NOF requirement shall stand at Rs. 2 crores).

ii. Not less than 85% of its net assets are in the nature of “qualifying assets.”

For the purpose of ii. above,

“Net assets” are defined as total assets other than cash and bank balances and money market instruments.

“Qualifying asset” shall mean a loan which satisfies the following criteria:-

iii. Further, the income an NBFC-MFI derives from the remaining 15 percent of assets shall be in accordance with the regulations specified in that behalf.

iv. An NBFC which does not qualify as an NBFC-MFI shall not extend loans to microfinance sector, which in aggregate exceed 10% of its total assets.

As stated above, all new NBFC-MFIs except those in the North Eastern Region of the country should have a minimum Net Owned Funds (NoF) of Rs 5 crore; those located in the Northeastern region should have a minimum NoF of Rs. 2 crores for purposes of registration. The existing NBFCs to be classified as NBFC-MFIs will be required to comply with this norm w.e.f April 01, 2012.

All new NBFC-MFIs shall maintain a capital adequacy ratio consisting of Tier I and Tier II Capital which shall not be less than 15 percent of its aggregate risk-weighted assets. The total of Tier II Capital at any point of time, shall not exceed 100 percent of Tier I Capital.   The risk weights for on-balance sheet assets and the credit conversion factor for off-balance sheet items will be as provided in para 16 of the Non-Banking Financial (Non-Deposit Accepting or Holding) Companies Prudential Norms (Reserve bank) Directions 2007.

ii. The CRAR for NBFC-MFIs which have more than 25% loan portfolio in the state of Andhra Pradesh will be at 12% for the year 2011-2012 only. Thereafter they have to maintain CRAR at 15%.

b.  Asset Classification and Provisioning Norms:

With effect from April 01, 2012, all NBFC-MFIs shall adopt the following norms(till then they shall follow the asset classification and provisioning norms as given in the Non-Banking Financial (Non-Deposit accepting or holding) Companies Prudential Norms (Reserve Bank) Directions, 2007).

c. All other provisions of the Non-Banking Financial (Non-Deposit accepting or holding) Companies Prudential Norms (Reserve Bank) Directions, 2007 will be applicable to NBFC-MFIs except as indicated therein.

a.  Pricing of Credit

b.  Fair Practices in Lending

I. Transparency in Interest Rates

The Master Circular issued for NBFCs on Corporate Governance vide CC No. 187 dated July 01, 2011, shall be applicable to NBFC-MFIs also.

NBFC-MFIs shall review their back-office operations and make the necessary investments in Information Technology and systems to achieve better control, simplify procedures, and reduce costs.

All NBFCs may refer to the circular RPCD.CO.Plan BC. 66 /04.09.01/2010-11 dated May 3, 2011, issued by the Rural Planning and Credit Department of RBI titled  “Bank loans to Micro Finance Institutions (MFIs) – Priority Sector status” issued to banks with regard to guidelines on priority sector.

5. Existing NBFCs that satisfy the above conditions may approach the Regional Office in the jurisdiction of which their Registered Office is located, along with the original Certificate of Registration (CoR) issued by the Bank for change in their classification as NBFC-MFIs. Their request must be supported by their Statutory Auditor’s certificate indicating the asset (loan) pattern as on March 31, 2011. The onus of including only eligible assets for the purpose of classification as NBFC-MFI shall be that of the company concerned. The change in classification would be incorporated in the Certificate of Registration issued by the Bank as NBFC-MFI.

6. In terms of paragraph 15 of the Non-Banking Financial (Non-Deposit accepting or holding) Companies Prudential Norms (Reserve Bank) Directions, 2007 all NBFCs are required to submit Statutory Auditors Certificate with reference to the position of the company as at end of the financial year ended March 31 every year. For an NBFC-MFI, such Certificate will also indicate that the company fulfills all conditions stipulated to be classified as an NBFC-MFI in this circular.

7.  Non-compliance with these Directions shall invite penal provisions under the RBI Act, 1934.