This report outlines the findings of the Economist Intelligence Unit’s in-depth analysis of the microfinance business environment in 54 countries. The index that underlies this report allows countries and regions to be compared across three broad categories: regulatory framework, institutional development and investment climate.

The study uses a methodology that was originally developed for Latin America and the Caribbean in 2007 and was employed for the first time on a global basis in 2009. Most of the research for this report was conducted prior to May 2010, although some later developments (up to July) were included where they were particularly significant. Future studies will build on this project by increasing the number of interviews conducted, utilizing new data, and refining the methodology. We welcome your feedback. Please contact us at Microfinance@economist.com 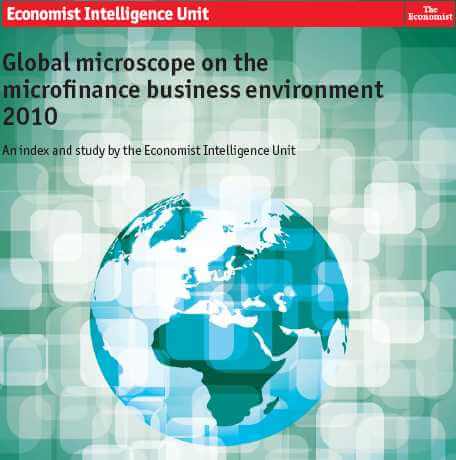 Download the Global microscope on the microfinance business environment 2010 below

Some of the findings of the report follow below:

Peru is the best place for microfinance for the third year running; Pakistan and Kenya join the top ten. India at No 8.

Peru offers the best microfinance business environment for the third year running, according to the Economist Intelligence Unit’s Global Microscope 2010. Yet the top spots have been shuffled this year, with the Philippines advancing to second place, overtaking the 2009 runner-up, Bolivia. New to the top ten, Kenya managed to climb three ranks and squeezed into tenth place overall; Pakistan jumped from 11th to fifth place thanks to regulatory reforms and an increased range of microfinance services. In turn, two countries–Uganda and Nicaragua–fell out of the top ten to take 11th and 13th spots, respectively.

2. Substantial room for improvement exists on a global level. The best country receives a score just short of 75 out of a possible 100. Only 17 of 54 countries score 50 points or higher.

3. Two countries, Azerbaijan and Nepal, rose out of the bottom ranks this year. Azerbaijan now places 38th and ties with China, thanks to improvements in its regulatory framework. Nepal benefited from a more hands-off approach by the state and from new regulations that facilitate micro-deposit taking.

4. Five Latin American countries hold the top spots, down from six last year. Previously the seventh-best environment for microfinance, Nicaragua has experienced a notable deterioration in investment and operating conditions for microcredit providers since 2009, largely as a result of the “No Pago” movement.

5. New to the bottom rank, Venezuela finishes last in the 2010 index. It replaces Thailand, in large part because of deteriorating investment and operating conditions for NGOs, but also because of slight improvements in Thailand, whose microfinance sector remains highly state-led.

This work was supported by financing from the Multilateral Investment Fund (MIF), a member of the Inter-American Development Bank Group; CAF (the Andean Development Corporation) and the Netherlands Technical Assistance Trust Fund at the International Finance Corporation (IFC). The complete index, as well as detailed country analysis, can be viewed online atwww.eiu.com/sponsor/GlobalMicroscope