MFI activities in AP come to a halt

The activities of microfinance institutions (MFIs) in Andhra Pradesh have come to a grinding halt, following an ordinance issued by the state government last week regulating their operations.

The Andhra Pradesh Micro Finance Institutions (Regulation of Money Lending) Ordinance, 2010, which came into effect on October 15, stipulates that MFIs should register with the project director of the district rural development agency.

With none of the MFIs complying with the provisions of the ordinance so far, Krishna district collector Piyush Kumar on Wednesday directed the MFIs to stop their activities, particularly the recovery of loans, till they registered themselves.

Kumar warned the MFIs of strict action if they were found carrying out their activities without being registered. According to the district administration, the MFIs had advanced over Rs 290 crore to as many as 200,000 people in the district. Read the rest on Sify

The Andhra Pradesh High Court today asked the State Government to come up with a mechanism to carry on loan collections till the time it gives judgment on a petition seeking quashing of the ordinance issued to regulate microfinance companies.

Posting the matter for further hearing on Friday, a Bench sought to know the rationale behind stopping lending and recovery of loans by microfinance institutions (MFIs) till they are registered with the district administration. Read more on Outlook.

Opposition parties cornered the Andhra CM K Rosaiah, saying he was refusing to crack down on MFIs due to Rahul Gandhi’s proximity to these loan-giving entities which have been blamed for a spate of suicides in the state. 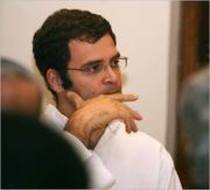 The serious nature of the accusations forced Chief Minister K Rosaiah to issue a denial that AICC general secretary Rahul Gandhi had any love for Microfinance Institutions (MFIs).

Microfinance Institution Network (MFIN)—the self-regulatory organization of the microfinance organization— has demanded a comprehensive regulator for the sector to check indiscipline in the functioning of the sector.

It looks as if microfinance in India is facing its first major crisis. Even though the crisis has been linked to recent farm suicides in Andhra Pradesh, it may not be far-fetched to connect it to the hugely successful IPO of SKS Microfinance, the nation’s biggest micro-lender, and the prospect of lucrative profits.

Far from the promise of Grameen Bank-style microfinance, which earned its founder, Bangladeshi banker Mohammed Yunus, a Nobel Peace Prize, India’s microfinance lenders have come in for increased scrutiny in the wake of reports that high-interest rates and coercive loan collection by some institutions have led to as many as 30 suicides in the impoverished far eastern province of Andhra Pradesh. A group of India’s largest microfinanciers is suing to block strict new regulations by the state to rein in coercive practices. Read more on Asia Sentinel.