The Reserve Bank of India today released on its website the Report of the RBI Sub-Committee of its Central Board of Directors to study Issues and concerns in the microfinance institutions (MFI) sector.

The Sub-Committee has recommended the creation of a separate category of NBFCs operating in the microfinance sector to be designated as NBFC-MFIs. To qualify as an NBFC-MFI, the Sub-Committee has stated that the NBFC should be “a company which provides financial services pre-dominantly to low-income borrowers, with loans of small amounts, for short-terms, on an unsecured basis, mainly for income-generating activities, with repayment schedules which are more frequent than those normally stipulated by commercial banks” and which further satisfies the regulations specified in that behalf.

The Sub-Committee has also recommended some additional qualifications for NBFC to be classified as NBFC-MFI. These are:

The Sub-Committee has recommended that bank lending to NBFCs which qualify as NBFC-MFIs will be entitled to “priority lending” status. With regard to the interest chargeable to the borrower, the Sub-Committee has recommended an average “margin cap” of 10 per cent for MFIs having a loan portfolio of Rs. 100 crore and of 12 percent for smaller MFIs and a cap of 24% for interest on individual loans. It has also proposed that, in the interest of transparency, an MFI can levy only three charges, namely,

The Sub-committee has made a number of recommendations to mitigate the problems of multiple-lending, over-borrowing, ghost borrowers, and coercive methods of recovery.

For monitoring compliance with regulations, the Sub-Committee has proposed a four-pillar approach with the responsibility being shared by

While reviewing the proposed Micro Finance (Development and Regulation) Bill 2010, the Sub- Committee has recommended that entities governed by the proposed Act should not be allowed to do a business of providing thrift services. It has also suggested that NBFC-MFIs should be exempted from the State Money Lending Acts and also that if the recommendations of the Sub-Committee are accepted, the need for the Andhra Pradesh Micro Finance Institutions (Regulation of Money Lending) Act will not survive.

The Sub-Committee has cautioned that while recognizing the need to protect borrowers, it is also necessary to recognize that if the recovery culture is adversely affected and the free flow of funds in the system interrupted, the ultimate sufferers will be the borrowers themselves as the flow of fresh funds to the microfinance sector will inevitably be reduced.

It may be recalled that the Reserve Bank of India in October 2010 set up a Sub-Committee of its Central Board of Directors to study the issues and concerns in the microfinance sector, under the Chairmanship of   Shri Y H Malegam, a senior member on the Reserve Bank’s Central Board of Directors. Other members of the Sub-Committee included Shri Kumar Mangalam Birla, Dr. K C Chakrabarty, Deputy Governor, Smt. Shashi Rajagopalan and Prof. U R Rao. Shri V K Sharma, Executive Director, Reserve Bank of India was the Member Secretary to the Sub-Committee.

at the link below 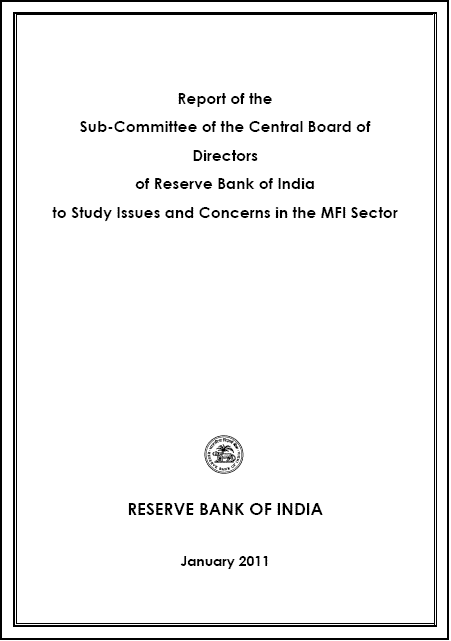