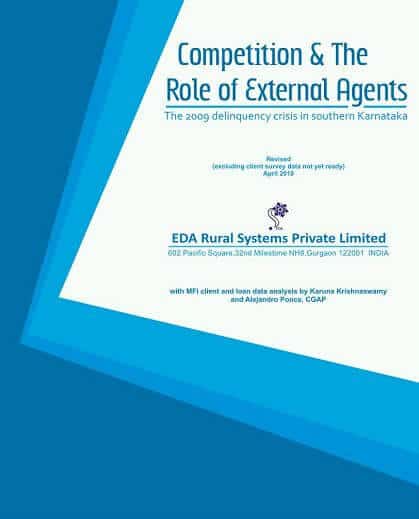 Preface
This is the report of a study of the delinquency crisis that broke out in the southern districts of the Indian state of Karnataka in the first half of 2009. It is based on a combination of qualitative research and analysis of the limited amount of client data presently available from some of the leading MFIs affected by the crisis and complemented by analysis of MFI level information.

The study team would like to thank the management and operational staff of all MFIs that cooperated in the study (see table above). We would also like to thank the leadership of the Association of Karnataka Microfinance Institutions (AKMI) – Mr. Vivekanand Salimath, Mr. Samit Ghosh, Mr. Suresh Krishna – for asking us to undertake the study and CGAP for their support and cooperation in conducting the work.

Thanks are also due to Mr. Krishna Morab, Secretary of AKMI for his support in coordinating the work with the MFIs. Unfortunately, BSS, a notable participant in the microfinance industry in Karnataka, refused to participate in the study.

As indicated in the report, a field survey of 800 MFI clients has been completed in the affected areas and also in two control locations and analysis is currently in progress. The results of the survey are expected to add substance to (or modify) the findings of this study and will be included in a revised report.

1.Karnataka & the state of Microfinance

1.1 Karnataka MFIs match the growth of the largest MFIs in India…

1.2 …and their performance is good too

2. What triggered the crisis

2.2 Sidlaghatta – crisis in the silk industry fuels a spill-over from Kolar

3. How important are multiple lending and over-indebtedness?

4. The Kolar Anjuman – basking in the attention

5.1 Unwise practices in the microfinance business

5.4 Break down of group solidarity as a loan guarantee mechanism

5.6 Stoppage of MFI credit – a constraint for enterprises

5.7 Willingness to repay – can the lending cycle be resumed

8. Summary of the situation

Some information on MFIs operating in the affected areas