CARE recently released a report on the outlook for Indian Rupee with regard to other currencies. The report is reproduced below :

Volatility in the exchange rate is increasingly being recognized as a concern for the Indian economy. After maintaining a range-bound movement in  Q1  FY12,  the rupee has registered depreciation against the dollar since August 2011. The question being raised is whether this trend will be reversed or has volatility come to stay in this market?

Rupee Movement in FY12 so far

In the first four months of  FY12,  the rupee had been stable, trading in the range of Rs 44-45 to a dollar. A depreciating trend in the rupee has been observed since the month of August. 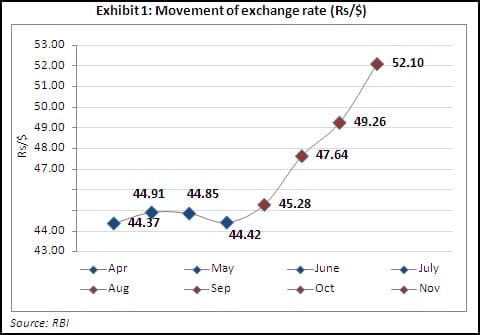 Looking forward, it may be gauged that market participants expect little reversal in this trend of rupee depreciation.   The forward premium on the dollar is the cost of carrying the dollar for specified tenure which may also be interpreted as the expected movement in the exchange rate.  Using the inter-bank forward premium for different tenure as an indicative measure of the rupee rate, we may infer that rupee depreciation may persist for a while.

The one month forward premium on the dollar has especially registered a  substantial jump of 454  bps between August and November (Table 1).

The main driver of rupee depreciation in the last three months has been the withdrawal of funds by foreign institutional investors (FIIs) from the domestic economy. The rather pessimistic view of FIIs is being governed by global developments. FIIs have registered a net sales position of US $ 1,581 million, between August and November so far. 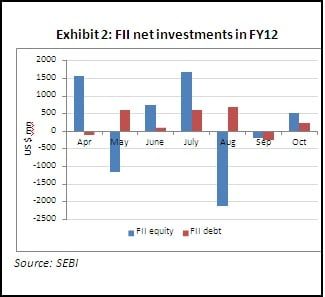 The ongoing   Euro-zone debt crisis seems to be intensifying and rescue packages have been of limited assistance in truly resolving the crisis. While the risk of sovereign default by individual Euro states is a concern, the risk of an impending contagion is also significant. It is estimated that the IMF has about $400 billion available to provide funding to the Euro-zone, but Italy alone has to refinance  $350  billion worth of debt in the next six months. The support by the IMF thus is a just fraction of the cumulative financing requirement to resolve this debt crisis. Changes in political leaders and finance ministers of these states,  debates on the role and mandate of the European   Central  Bank  (ECB)  and  European  Financial Stability Facility  (EFSF) and quantum of financial support to be provided by member states remain some points of indecision.

The scenario in the US does not provide an upbeat picture either. Delays in policy formulation on the setting of the debt ceiling for the state have reflected some lacunae in the management of government finances.  While housing starts, industrial production and consumer spending are gradually showing signs of improvement, the rate of unemployment remains uncomfortably high.   Growth estimates for the US have been revised downwards to 2.0% in Q3 from the earlier estimate of 2.5%.

The real estate problem,  weakening local government finances, lack of transparency in operations and systems of the government and deterioration of the assets of the banking system observed in the  Chinese economy is further dragging to the global macro-economic outlook for the coming months.

Domestic macro-economic prospects as well are weighed by high inflation and sagging industrial production, which have led to a downward revision of growth estimates to just 7.6% for FY12.

Consequently,   FIIs have withdrawn funds from emerging markets and invested back in the dollar which has been strengthening. In November (so far) itself, FIIs have registered a net sales position to the tune of US $ 87 million.

As these downbeat forces have played strong over the last few months,   investor risk-appetite has contracted, thereby increasing the demand for safe-haven such as US treasury, gold and the greenback. The Euro has depreciated 6.55% against the dollar in the last three months which has in turn made the dollar stronger vis-à-vis other currencies,  including the rupee.   With winter,  the demand for oil and consequently dollar is only expected to move further upwards. Domestic oil importers have also contributed to this strengthening to meet higher oil import bills.

The current account balance is composed of trade balance and net earnings from invisible.  While earnings from Invisibles have been quite robust this year  (growth of 17% y-o-y), the trading account has deteriorated on unfavorable terms of trade. Current account deficit (CAD), in Q1 FY12, had widened by Rs 40,000   crore,   over   Q4  FY11.   Furthermore, on a quarterly basis,  even invisible earnings have registered some decline. With the contribution of exporters remaining on the sidelines and earnings from Invisibles continuing to decline, a further widening of the  CAD  would result in the outflow of dollars from the  Indian economy accentuating the depreciation in rupee. In particular software, receipts would be under pressure given the global slowdown.

4. The decline in other Capital Flows

Foreign    Direct     Investments    (FDI),    External     Commercial Borrowings  (ECBs)  and  Foreign  Currency  Convertible  Bonds (FCCBs)   have maintained robust trends this year when compared with net inflows in FY11. However, on a month-on-month basis,  ECBs and  FCCBs have registered slowdown.  A prospective decline in these other inflows on the capital account of the balance of payments could cause further depreciation in rupee. While FDI has been increasing it has not been able to make up for lower other capital inflows.

Three areas of concern that may be identified are higher import bills, fiscal slippage and increased burden on borrowers:

A  depreciation of the local currency naturally manifests in higher import costs for the domestic economy. Assuming that both imports and exports maintain their current growth rates through the year,  higher import costs would widen the trade and current account deficit of the country. We expect the current account deficit to settle at  3.0-3.1% of GDP by March 2012- end. Additionally, the domestic economy could be faced with a problem of higher inflation through imports.  Commodities prices that are internationally denominated in US dollars would naturally be priced higher on the back of a stronger Dollar. Also, while global base metals prices such as nickel, lead, aluminum, iron and steel would have eased, the depreciating rupee would keep the price of imported commodities elevated.

The fiscal deficit for  FY12  was budgeted at  4.6%  of  GDP  in February, with the price of oil pegged at the US $ 100 per barrel. Throughout FY12 so far, however, the price of oil has been well above this reference rate, hovering at an average of US $ 110 over the last three months. Oil subsidy for the year is about Rs 24,000 crore for FY12. This will rise on account of the higher cost of oil being borne by the government. While there have been moves to link some prices of oil-products to the market, there would still tend to be an increase in subsidy on  LPG, diesel,  kerosene.  The government has already enhanced its borrowing programme in H2 FY12 by Rs 52,000 crore, to bridge the fiscal gap.

Higher rates will come in the way of potential borrowers in the ECB market. Today given the interest rate differentials in domestic and global markets, there is an advantage in using the ECB route. The depreciating rupee will make it less attractive. Further, those who have to service their loans will have to bear the higher cost of debt service.

Usually, exports get a boost in case the domestic currency depreciates because exports become cheaper in international markets. However,   given sluggish global conditions, only some sectors would tend to gain where our competitiveness will increase such as textiles, leather goods, processed food products and gems and jewelry. In case, the imported raw material is used in these industries they would be adversely affected. Therefore, exports may not be able to leverage fully.

OUTLOOK ON THE RUPEE

The RBI has maintained strong foreign exchange reserves, to the tune of US $ 320 billion as at October-end (with foreign currency assets accounting for about 89% of these reserves). However, it has refrained from (and has neither indicated in near-future) direct intervention in the forex market to curtail the depreciation of the rupee until now.

Assuming that global uncertainty continues to prevail, export growth is maintained and capital outflows persist, it is expected that this depreciation would continue. A worsening in any of the above variables would aggravate rupee depreciation.

The Report is prepared by the Economics Division of CARE Limited. The Report is meant for providing an analytical view on the subject and is not a recommendation made by  CARE. The information is obtained from sources considered to be reliable and CARE does not guarantee the accuracy of such information and is not responsible for any decision taken based on this Report.