The Government, under Bharat Nirman II Programme, has envisaged providing broadband coverage to all 2,50,000 Gram Panchayats by 2012. For the aforesaid broadband provisioning, the funds from Universal Service Obligation Fund (USOF) are being provided wherever required.

For rural and remote areas, the following “Rural Broadband Schemes (on-going as well as planned)” has been undertaken by USOF which would progressively provide broadband coverage to all villages including Gram Panchayats. For the implementation of these schemes, USOF provides financial assistance by way of subsidy to the Universal Service Provider, implementing the scheme. 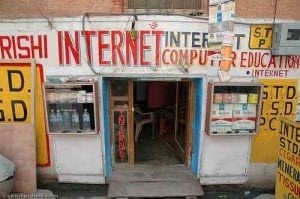 An Internet Cafe in India. Image-Credit:flickr.com

As of September 2010, a total of 2,10,902 broadband connections and 430 kiosks have been provided in rural and remote areas and Rs. 80.87 crore has been disbursed as a financial subsidy under this scheme.

The USOF is working on a scheme for providing financial assistance by way of subsidy for the wireless broadband active infrastructure such as BTS, by utilizing the existing passive infrastructure available with the Telecom Service Providers.

This scheme would provide broadband coverage to a majority of villages at a speed of 512 kbps. With the completion of the BWA & 3G spectrum auction, the stage is set of the launch of the scheme. The scheme has been submitted for approval of the competent authority.

The scheme is under approval from the competent authority and would be launched shortly. It is envisaged to be rolled out during the current Five Year Plan (2007-2012).

The government is actively working on the formulation of a National Broadband Plan. TRAI consultation with stakeholders on the subject is underway. The National Broadband Plan would address Broadband connectivity to all the Villages, including through Optical Fibre Cable, as required. However, no final decision has been taken on the matter so far.