FINO – The microfinance bank for the poor 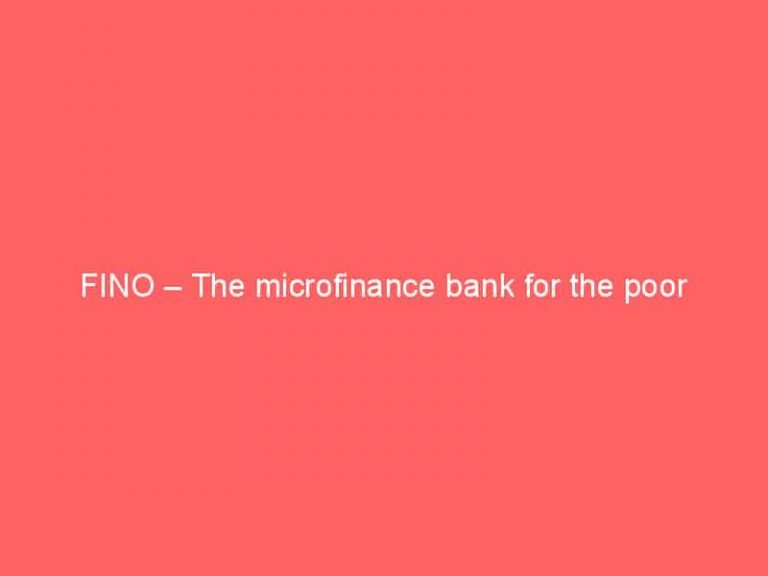 Thirty-seven-year-old Sivan Pandiyan had to run from pillar to post for over seven to eight months to get a meagre Rs 5,000 as a loan from a bank to carry out the maintenance and repair work of his taxi.

Tested to his limits, Pandiyan finally turned to the Financial Information Network & Operations Ltd, which came to his rescue by sanctioning the amount without any hassle.

Thanks to FINO, Pandiyan has been able to repair his taxi to eke out a living earning Rs 500-1,000 per day.

For many like Pandiyan, FINO has emerged as the helping hand providing much-needed financial assistance instantaneously, making it an attractive alternative to banks.

“My husband had purchased a taxi on his own but, after using it for several years, its condition deteriorated. Since we solely relied on our taxi for income, repairing it became a necessity,” Sivan’s wife Peevan Pandiyan told PTI in Mumbai.

“We did not have any money and the banks were not ready to provide us with the loan we needed so badly. One day, we learnt from our neighbours about FINO and we applied for a loan which was sanctioned immediately,” Pandiyan said.

The Rs 5,000 loan provided to Pandian was repaid in five months.

“What we found very gratifying was that FINO helped us in complying with all the formalities and, most importantly, sanctioned our loan almost immediately,” Pandiyan said.

Mumbai-based FINO, a multi-bank promoted company, is engaged in providing financial and non-financial products and services to the unbanked rural and urban population. It has enrolled 6 million customers since its inception in 2006.

FINO has come as a godsend for several poor like the Pandiyans, who are unable to avail of normal banking facilities.

In the last three years, FINO’s success has been phenomenal as is evidenced by its 6 million customer base. Its services have become so popular that, in some cases, 4-5 accounts have been opened by the same family.

That FINO has succeeded in spreading its wings in unbanked segments is evident from what Mary Paripuran, a business agent with FINO’s Dharavi (also known as Asia’s largest slum) office, has to say, “There are also instances when customers themselves have come forward to deposit or withdraw money before I go and meet them.”

There are several other customers like Pandiyan who are unable to avail of mainstream banking. Take Munna Maurya, a bhelpuri vendor from Mahim (suburban Mumbai), who deposits Rs 20 to Rs 200 with FINO, depending upon his revenue.

“I deposit an amount every two-three days depending upon my business. This service helps me a lot — FINO is just like a bank but without any hassles,” Maurya said.

There are also regular customers like Abdulazeez Dhulkarne, a salesman by profession, who deposits Rs 300 daily and is a FINO customer since March 2008.

“The service is easy to use. We do not have to go anywhere. They come to us every day either for depositing cash or withdrawing it. This saves me a lot of time,” Dhulkarne said.

For 18-year-old Priyanka Sontake, the money she is depositing with FINO will help her pursue admission in a good college. “I’m awaiting my Class X result. I want to do a diploma in IT but my family cannot afford the fees. So I thought of saving my pocket money with FINO along with my mother,” said Stake.

The company aims to tap the unbanked segments in India and take banking and banking technology to them pan-India.

“We will continue to provide all our services across the country. We will penetrate much deeper this year. We still feel a lot of work needs to be done to cover the unbanked population,” FINO’s Chief Financial Officer and President (Sales & Marketing), Rishi Gupta, said.

The company has tie-ups with 10 banks, 20 microfinance institutions and three insurance companies for providing smartcards to rural customers and to the unbanked population in urban areas.

FINO has enrolled more than 6 million people within three years. With the help of biometric smart cards and business correspondents, FINO wants to enrol 25 million customers by 2011.