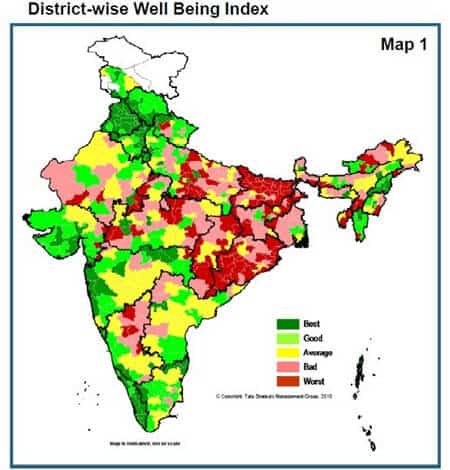 Tata Strategic Management Group, the largest Indian owned management consulting firm, today launched a report on the Well Being Index (WBI) and Female Security Index (FSI) for India. Tata Strategic analyzed the National Sample Survey Organization household surveys and Census 2001 data to generate the Well Being Index and National Crime Bureau– 2006, 2007 data on crime against women to computing the FSI for each district of India.

The Well Being Index has been created using eight 8 critical categories carefully selected to form the index on the basis of their ability to explain the well being of households broadly covering all aspects of well being.

Key Findings  on the Well Being Index:

1. Eastern and Central India are markedly worse than the rest of India

2. The Northern states of Punjab, Haryana, and Delhi are amongst the best.

3. Even within the same state, there is significant disparity amongst districts. For instance, huge variation across districts in Karnataka is noticeable: while Bangalore is amongst the ‘Best’, Bellary and Gulbarga are ‘Bad’ and Bijapur, Koppal and Gadag are amongst the ‘Worst’

While the WBI captures all major material and social parameters, it does not include a very important reality of Indian society – the well being, status, and treatment of women. Using a Gender Ratio and data on crime against women, a scoring methodology was used to compute the FSI for each district in India. 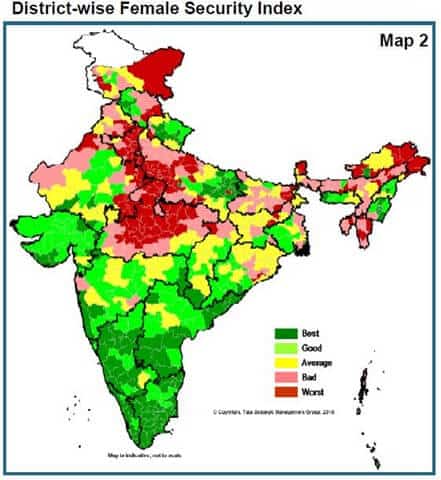 A comparison of WBI (Map1) and FSI (Map 2) reveals some interesting and counterintuitive findings. There seems to be no correlation between these two indices. Some of the most well off parts of India (Punjab, Haryana, Delhi & Western
UP) as reflected in the WBI have the worst rating in terms of the FSI.

Likewise, some of the states having districts ranking ‘Bad’ or ‘Worst’ on WBI (e.g. Orissa, Eastern UP, WB, Jharkhand, Chhattisgarh, and Bihar) are better placed on Female Security.

The detailed and full report can be purchased at the Tata Strategic Management Group Website – http://www.tsmg.com/home.html