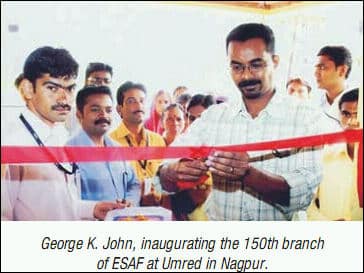 During his inaugural address George K. John opined that ESAF’s mission was to expand to the most unreached areas in the country. K. Paul Thomas, Managing Director, ESAF Microfinance, also expressed his delight in crossing the new milestone.

“The fact that ESAF doesn’t have a presence in saturated MFI markets shows the commitment of the Organization in achieving its mission of serving the ultra-poor in the most unreached areas”, he added.

ESAF organized a certified training program on Business Development at Bhavana Auditorium, Thrissur on Nov 19, 2010. K. Paul Thomas, Managing Director, ESAF, presided over the function. During his presidential address, he exhorted the members to dream big and carve a niche for themselves in their respective fields.

He reminded that their enterprises were supporting not only their families but also the state as a whole and urged them to make use of all the resources provided by the state to small and micro-enterprises. Sridharan Nair P., Director – ILO Project, welcomed the gathering. He extended his gratitude to the Block Development Officers of the DIC for their wholehearted support in registering the business units. 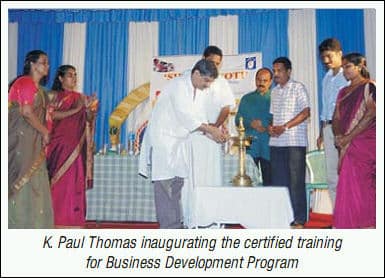 Almost 80%of the Shram Jyothi project, started in Jan 2010, has been completed. The training was led by EKSAT (a group of professionals specialized in grass root level training) and accredited trainers from Kudumbashree.