Equitas Holdings Ltd has fixed the dates when its shares would be offered to the public through an IPO. The Equitas IPO would open on the 5th of April,2016 and close on the 7th of April, 2016. The company received approval from SEBI in January 2016 for its Draft Red Herring Prospectus.

It has fixed a price band of Rs Rs 109-110 per equity share of face value Rs 10 and it hopes to raise Rs 2,176 Crore at the upper end of the price band. Out of this amount raised Rs 720 Crore will accrue to the company through a new issue of shares while the remaining Rs 1456 Crores will go to the foreign investors who are selling their stake in the company. If you are keen to know the allotment status of your Equitas IPO application subscribes to our newsletter in the sidebar to receive regular updates.

The company was set up in 2007 as an NBFC by Mr. P. N Vasudevan and has its head office in Chennai, Tamil Nadu. After the Andra Pradesh Microfinance crisis in 2010, the company started offering vehicle and housing loans to diversify its portfolio. In comparison to it’s peers, Equitas is placed in the 8th place with regard to the branch network and it had 361 Branches as of March 2015. This is a fraction of the more than 2000 branches that Bandhan Bank operates through. Equitas also had a loan portfolio outstanding at Rs 2144 Crore at the end of FY2014-15. You can read a detailed report on Indian Microfinance Companies and the state of the Microfinance sector at the link below: 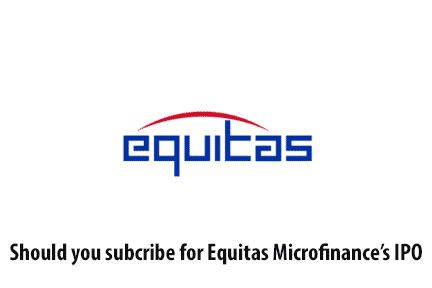 Lack of Promoters Faith in the Company

The promoter P. N Vasudevan holds a meager 3.5% stake in the company, but that is not deterring him from offering more of his shares for sale in the IPO. It represents a complete lack of confidence from the founder and promoter in the future of the company. Most promoters hold on to their stock because they always believe that the company will be worth more in the future, but not Mr. Vasudevan, it seems he is more interested in cashing out when the time is right.

About 10 microfinance companies have been issued small finance bank licenses by the Reserve Bank of India till late last year. Most of these 10 banks are going to begin their operations in 2016. Now the competition is going to heat up among small banks and this will negatively affect profit margins. While the consumer will benefit, investors who invest in such companies may not get an attractive return in the medium term.

Yes, this is another of the marquee companies from Sequoia Capital’s famed stable. SKS Microfinance in 2010, came out with an IPO with an issue price of Rs 985 and sold a large number of shares to the gullible public who lapped it up. Within 6 months the stock was trading below Rs 500 because of the Andhra Pradesh Microfinance crisis.

Murmurs of another crisis in the Microfinance Sector of India

In January 2016, the Wire magazine published a scathing indictment detailing how the sector was lurching towards another microfinance crisis because of multiple lending. It remains to be seen if this is going to blow up anytime soon.

Who can invest in the Equitas IPO?

You can read the Company’s DRHP and take a final call on whether it is worth investing in this company.