The Digital India programme has been envisaged by the Department of Electronics and Information Technology (DeitY) and includes all the current schemes being run by the Telecom Department, Rural Development Ministry and DeitY.

Watch the announcement of the program by the PM on Independence Day below :

The vision of the programme is focused on three key ideas:

1. Creation of Digital Infrastructure and Electronic Manufacturing in India.

The three key Digital Tools which will serve as the pillars of the project are:

1. A Digital Identity which will authenticate the end-user.

2. A Bank accounts for Direct Benefit Transfers of subsidies and payments.

By focusing on these three key ideas and the provision of these three digital tools the government hopes to lay the foundations for the creation of a digital knowledge-based society in India. The Pradhan Mantri Jan Dhan Yojna will act as an important catalyst in realizing the goals of the digital mission by providing universal access to the banking system. 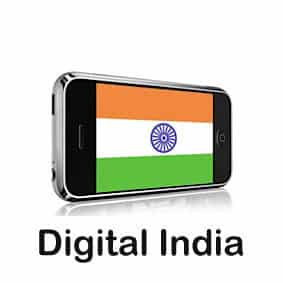 Currently, Shri Ravi Shankar Prasad, the Communications and IT Minister is holding discussions with the IT Ministers of different states to finalize a road-map. More details and the final guidelines are expected to be announced next month. Last week’s announcement by the Government can be accessed here.