In the last week of November 2010, CRISIL released a list of microfinance companies whose debt ratings are under watch and indicated that they could be downgraded in view of their exposure to the Andhra Pradesh Microfinance Crisis. Given below is the press release issued by CRISIL.

CRISIL has placed its outstanding ratings on the debt instruments of 12 microfinance institutions(MFIs) on ‘Rating Watch with Negative Implications’. Six of these MFIs have ratings that are in the’ category or below. The implementation of the Andhra Pradesh (Andhra) ordinance has triggered a chain of events that can permanently damage the business models of MFIs, by impairing their growth, asset quality, profitability, and capital-raising ability.

The Rs.250 billion (as on March 31, 2010) microfinance industry plays an important role in extending formal financial services to 28 million of India’s under-served rural poor; with the decline of the sector, the flow of credit to this segment of the population will be curtailed. 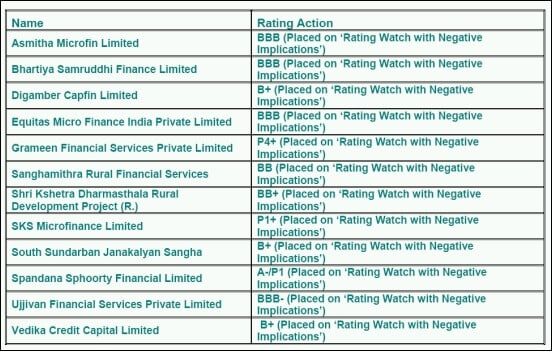 The Andhra ordinance has been highly unfavorable for the industry resulting in a precipitous drop in the collection efficiency and profitability of MFIs, especially those operating in Andhra. Further, the flow of funding to the entire sector from the banking system has been severely constrained.

Consequently, the liquidity position and growth prospects of many MFIs, including those operating outside Andhra Pradesh have been affected. Structurally, the regulatory jurisdiction and framework for MFIs remain unclear, with actions by multiple authorities increasing the challenges for the industry.

Unless urgent steps, including regulatory intervention, are taken to address these issues, these developments have the potential to materially weaken the business and financial risk profiles of MFIs and result in rating downgrades. The impact on the creditworthiness of individual entities will differ depending on their exposure to Andhra, their liquidity, and their ability to raise capital from alternate sources.

CRISIL will actively monitor developments in the sector and take appropriate rating actions. Another risk is that other states may initiate state-level legislation similar to the Andhra ordinance. Moreover, the regulatory environment for the sector could evolve further after the decision of Andhra Pradesh High Court, recommendations of the Malegam committee instituted by the Reserve Bank of India (RBI), any potential changes in RBI norms related to priority sector funding to the sector, and provisions of the microfinance bill proposed by the Ministry of Finance.

CRISIL has consistently highlighted that as an emerging sector, the MFI industry is exposed to the risk of changes in the political, legislative, and regulatory environment. Some of these risks are now becoming evident.

The rating actions follow CRISIL’s credit alert (refer to release, CreditAlert: Indian Microfinance Institutions) published on October 25, 2010, and a subsequent assessment of the collections and funding position of the rated MFIs.

Collections in Andhra have plummeted below 20 percent, from nearly 99 percent prior to the ordinance, with MFIs finding it difficult to make contact with borrower groups, and having to move to a monthly repayment cycle in line with the ordinance. Fresh disbursements in Andhra have been negligible over the past few weeks. CRISIL believes that this would lead to a sharp increase in delinquencies for MFIs that have significant Andhra exposure. So far, MFIs with limited or no Andhra presence have maintained good collection levels, though their disbursement growth has reduced sharply.

MFIs’ ability to raise external funding is currently significantly constrained. Access to fresh loans from banks and financial institutions, which form a significant proportion of the sector’s total funding, has dropped materially. Reduced access to funding not only affects MFIs’ liquidity – and, consequently, their ability to service debt – but also limits their fresh disbursements, which can have a cascading effect on their growth and asset quality in the near term. It is possible that bank funding to the sector will resume later, but the timing and extent of such funding are uncertain. In addition, the quality of the banks’ exposure to this sector could weaken from the current strong levels.

CRISIL also rates nine securitization transactions originated by MFIs. Only two of these transactions have some exposure to loans originated in Andhra Pradesh. The collection performance of all the rated pools remained strong until recently. The credit enhancements and the structural features currently protect investor payouts from any potential increase in delinquencies and are consistent with the
outstanding ratings. CRISIL will continue to monitor the performance of these pools regularly and will take appropriate rating actions in case collections drop significantly.