How to Enhance their Productivity and Profitability?

The caffeine content in coffee makes coffee an exciting drink that energizes people having it. The production of coffee needs a temperature of 230 to 280C and rainfall up to 60 to 80 inches on average annually. The South Indian state of Kerala has a favorable climate along with a fairly dry spell of 70 to 90 days that makes it an ideal place to grow coffee. In Kerala, about 76,000 holdings with an average size of 1.1 hectares symbolize smallholder plantation but provide livelihood opportunities to 100,000 families, more importantly to agricultural laborers, women, and children.

Varieties of Coffee grown in India

Coffee has been grown in India from the early 17th century, though there is no consensus on how the cultivation began. There are currently many versions of how coffee came to be cultivated in India.

Kerala accounts for 96.70% of Robusta coffee production and a 3.30% share of Arabica coffee as compared to 70.03% of Robusta and 29.97% of Arabica production at the national level. Robusta fetches lower prices in the domestic and international markets than Arabica. The brewing value of Robusta is also comparatively low. Though irrigation can increase the yield of Robusta by 60% to 70% small coffee growers do not provide irrigation due to the high costs of sprinkler and drip irrigation systems. The average lifespan of Robusta coffee plants varies from 60-80 years and requires the least amount of pesticides.

Planters in Kerala prefer a multi-cropping pattern consisting of coffee, tea, and spices to optimally utilize resources and insulate the plantation from vagaries of nature and market. A special feature of the coffee plantation in Kerala is that the coffee plants are grown under the shade of tall shady trees. Monsooned coffee is a special delicacy of the Malabar region. A less known fact about this Malabar coffee is that it was discovered by accident.

About 90% of holdings in the Wayanad coffee region are below 2 hectares in size. These holdings are mainly owner-operated and casual wage labor is sparingly engaged. Though coffee is a labor-intensive plantation only large estate owners employ permanent and casual workers. Small and marginal farmers practice mixed farming; they shift crops according to the changes in market conditions. Particularly, when coffee prices fall, they reduce working expenses on coffee and shift to other crops especially to pepper. Pepper vine and areca nuts are quite common in coffee gardens of small farmers.

Since 1976, the Kerala Forest Development Corporation has been managing all coffee estates including territories in Pamba, Kallumala, and Cheeyambam in Wayanad district. Areas not suitable for cardamom cultivation have been exclusively planted with coffee.

Robusta fetches lower prices in the domestic and international markets than Arabica. The brewing value of Robusta is also comparatively low. Though irrigation can increase the yield of Robusta 60% to 70% of small coffee growers do not provide irrigation due to the high costs of sprinkler or drip irrigation system. The average lifespan of Robusta coffee plants is 60-80 years and requires the least amount of pesticides. 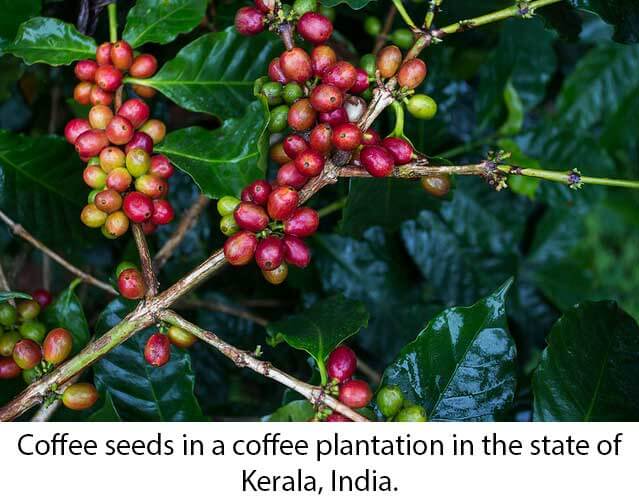 Wayanad region has more than 33% of the district’s area under coffee, called a green paradise and coffee county of Kerala with high hilly areas and places of tourist attraction. Coffee is grown in Wayanad as a single crop as well as with pepper. There is a very small 10-acre farm at Coffee Aroma resort which is merely an added attraction to this tourist place away on the slopes of the Chembra Peak. Conducive climate, seething hills, and greenery make Malabar region wonderful so are flora and fauna that enhance its attraction.

With the economic liberalization in 1991 in India, the role of the Coffee Board has been diluted considerably and the pooling system was abrogated. In 1993 the Internal Sales Quota [ISQ] entitled coffee growers to sell 30% of their products in the country. Subsequently, the amended Free Sales Quota [FSQ] in 1994 (FSQ) permitted large and small scale growers to sell between 70% and 100% of their coffee either domestically or internationally. And finally, an amendment in 1996 fully liberated all coffee growers and allowed them the freedom to sell their produce wherever they wished.

However, this led to the emergence of intermediaries in trade, and in absence of regulated and development agency to coordinate and provide directions to coffee marketing, the middlemen collect coffee directly from farmers at a reduced price and sell to wholesalers/exporters at a high price. Farmers often sell coffee well in advance of the harvesting season at prices much lower than those prevailing in the market in order to tide over their financial difficulties.

After the withdrawal of the Coffee Board, the vacuum created for some time has been to an extent replaced by private sector initiatives like Indian Coffee Trade Association (ICTA), which began auctioning on a periodic basis. There are also efforts towards online trading which is being conducted through web portals. However, the overall scenario is that less than 10% of coffee is sold through auctions as most small growers prefer to sell the unprocessed crop directly to exporters or roasters through agents

As coffee consumers in Kerala are increasing the demand for domestic consumption is expected to rise. While international coffee chains are already planning their strategic entry in Kerala, domestic coffee chains are also expanding their businesses to capitalize the market opportunities. The latest entrants include Hilite Group of Kozhikode, Beans, and Flavours, a small coffee blender from Idukki district and Tonico. Hilite Group plans to establish a chain of 100 coffee shops on the NH47 and NH 17 shortly. The domestic coffee chains have the potential to succeed and produce some global brands on account of factors like ambiance, product quality, and services.

In the Coffee value chain, farmers capture not more than 20 % of the end value. Other Intermediaries and traders (local and international) and roasters gain substantially. It is estimated that roasters alone retain about 30% of the value, and brands also play an important role in the value chain. Given that it is a buyers’ market, there are always efforts to reduce the value for the primary producers. Mechanisms like certification are aimed at allowing fair margins at the producer level but often they become counterproductive due to a host of reasons.

Government has initiated some measures to help farmers mitigate distress that include, among others,

[i] restructuring bank loans and providing interest relief to coffee growers (a subsidy of 5% for small growers and 3% for large growers on working capital) [ii] rainfall insurance as a risk management support for coffee growers in collaboration with AIC [iii] in June 2010 the coffee debt relief package for the debt-ridden small coffee growers with a total financial implication of Rs.241.33 crores [iv] Since April 2003, Government of India has set up a Price Stabilization Fund (PSF) aimed at providing financial relief to the growers when the prices of the commodities covered fall below a specified level [v] Subsidies range from 20 percent to 40 percent depending on the size of the holdings [vi] Coffee Board facilitates support for the establishment of processing units, the formation of growers’ collectives

[A] The reasons for coffee growers’ inability to [i] replant Arabica coffee being superior in many respects to Robusta [ii] irrigate Robusta coffee to increase yield by 60% to 70% when the adequate subsidy is available to augment water resources [iii] upgrade quality of coffee when the Coffee Board facilitates support for the establishment of processing units, the formation of growers’ collectives, etc. [iv] adopt scientific plant protection measures to control stem borer infestation on Arabica [v] access technical advisory services of extension staff for adopting scientific practices evolved at huge cost by the regional research station to increase productivity, quality, and profitability of coffee. [B] Slow growth and development of the coffee economy and impact on coffee growers’ financial status despite significant support being extended both by the Government and the Coffee Board in various forms. [C] Despite the fact that the prices during 2004-05 to 2011-12 progressively increasing [i] in the international and [ii] in auction markets in India from Rs,72.16/Kg to Rs.240.61 for markets from 69.72 US cent/lb to 202.16 for coffee and for Future in New York prices at 90.38 US cent/lb to 244.26 for Arabica and 34.09 to 97.25 for Robusta Arabica and from Rs.34.94 to Rs.113.99 for Robusta, coffee growers in Kerala have not been benefitting.

For enhancing coffee productivity and quality, streamlining marketing and financial viability of small farms focused attention is urgently required in the following areas.