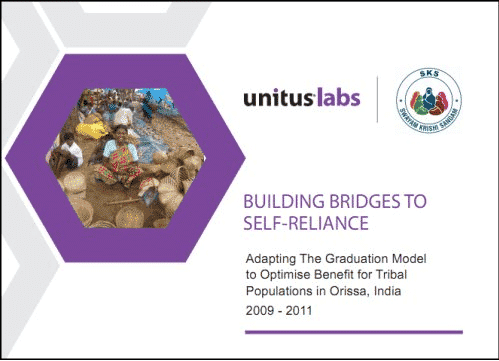 There is no ‘one size fits all’ approach to addressing poverty. A highly successful model in one case may prove insufficient in another, as each and every poor community has its own unique set of circumstances, strengths, and needs. This case study documents the experience of SKS NGO as it adapts what is commonly referred to as the ‘graduation model,’ to meet the needs of extremely poor tribal communities in Orissa, a state in northeast India.

The ‘ultra-poor’ — those households that are considered the poorest of the poor — are often excluded from government aid programmes, deemed too risky for micro-credit, and have seen little help overall from mainstream anti-poverty interventions. The graduation model is a 24-month programme that has been shown to work effectively with ultra-poor populations in rural areas within close proximity to non-profit organisations and microfinance institutions, which are able to provide supportive services after the intervention has ended.

SKS NGO had successfully implemented the graduation model with ultra-poor rural populations in Andhra Pradesh during its Narayankhed pilot (2007-2009). Wanting to replicate the model in other areas, the team chose to work with a completely different population for their second pilot: the ultra-poor tribal communities of Koraput in the state of Orissa. Because of the extreme geographic and cultural isolation of these communities, as well as the lack of accessible services and organisations in the area to provide continued services, the SKS team knew it had to alter the standard graduation model. The team’s challenge was to develop a programme that minimized reliance on external support, one that would lay the foundation for the community to become self-reliant and ensure that benefits gained through the programme could be continued long after the intervention ended.

When designing a programme for highly marginalized communities, practitioners had to evaluate the ease with which households could be re-integrated into the surrounding communities and market economy. The team identified several characteristics of highly marginalized, isolated communities and how these characteristics would affect the design of a programme. The team also documented several key factors that heavily contributed to the programme’s success in order to aid practitioners endeavouring to work with populations that exhibit similar characteristics.

Using these key success factors, the team developed a set of programme components — enhancements to the traditional graduation model — to address the specific needs of this population and enable the community to sustain benefits over the long term.

ENHANCEMENTS TO THE GRADUATION MODEL:

Households in the tribal communities would often be forced to go without food if they ran out before market day or if an income-earning member of the household fell ill. The community food bank was created so families would never again have to go without food in an emergency or in a time of sickness. Each household contributed a certain amount of rice each week to a community rice box, creating a communal surplus to be used in emergencies.

In addition to the traditional graduation model, where each beneficiary received a productive asset, the SKS team also provided training and supplies for beneficiaries to start a separate livelihood activity. This served to diversify income sources so that if one failed, the beneficiaries could draw upon the other to sustain themselves for a time. The livelihoods addressed needs within the community, which enabled beneficiaries to buy, sell, and trade amongst themselves and not rely solely upon other villages or external markets.

Due to their remote location, there were no easily accessible or affordable medical facilities available to the tribal communities. For primary care, SKS NGO trained members of the community to work as health professionals who would then provide ongoing diagnosis and treatment of common ailments. The objective was to provide ‘last-mile delivery’ of medical services and medicines. For more serious medical problems, a free surgery camp was created.

SKS felt strongly about the importance of saving in order to provide protection against unexpected expenses and therefore made saving a requirement of the programme. (It was optional in the traditional model.) Beneficiaries developed the habit of saving weekly to build a financial cushion, and also created a community emergency health fund from the sale of excess rice, to borrow against in case of a medical emergency.

SKS NGO helped beneficiaries form self-help groups (SHGs). These groups then gained access to a savings account and bank loans at a newly opened branch of the State Bank of India in a nearby town.

Because beneficiaries would have to successfully manage their own finances after the completion of the intervention, SKS NGO felt it was essential that they learn the basics of income and expenditure tracking, budgeting, financial goal setting, and financial negotiations. Financial literacy training thus became a central element of the programme.

The combined result of these programme enhancements, along with elements of the traditional graduation model, enabled the community to sustain the positive changes to their quality of life. The pilot was considered a success with 850 of the 887 participants have graduated from the programme. The communities now had food banks in place for emergencies, primary health workers in the villages to diagnose and treat common ailments, an understanding of financial management with access to a bank account and loans, individual savings of as much as Rs 10,000 (US $200) per person to provide a cushion when families fell on hard times, and a set of skills providing them with a livelihood activity along with a productive asset.

SKS NGO is eager to take the lessons learned from the Orissa pilot and apply them to the next ultra-poor pilot. The team is also experimenting with several additional changes to the model developed in Orissa in order to create an even more effective and cost-efficient intervention that can scale to reach hundreds more tribal families.