The Government of India and Reserve Bank of India [RBI], acknowledging the significance of the role of formal credit for agricultural development and growth, initiated a policy to progressively institutionalize agricultural credit system and expand it beyond cooperative credit structure by nationalizing private banks in 1969, establishing regional rural banks in 1975 and subsequently licensing private sector banks [PBs] since January 1993 and 2001 during the post-reform period. Policymakers have realized that the banking system in India should grow in size and sophistication to meet the challenges of an emerging economy and extend the geographic coverage of banks to improve rural households’ access to banking services.

With the induction of private banks in the dispensation of rural credit, the average population coverage by a commercial bank branch in rural and semi-urban areas declined from 17,200 as on end-June, 2005 to 15,900 as on end-June, 2010. The Indian financial system has made impressive strides in resource mobilization, geographical and functional reach, financial viability, profitability and competitiveness. However, vast segments of the rural population, especially the underprivileged sections of the agrarian economy, have still no or grossly inadequate access to formal banking services.

The RBI has considered licensing a limited number of new private banks since a larger number of banks would foster greater competition, and thereby reduce costs, and improve the quality of services. More importantly, it would promote financial inclusion, and ultimately support inclusive economic growth, which is a key focus of public policy. 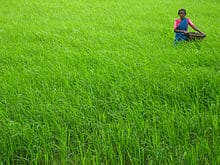 Though PBs doubled agricultural credit disbursement between 2004-05 and 2006-07 as stipulated by the Government, the increase in the outstanding level of agricultural credit could not reflect in increasing its share in ANBC of the individual banks as also banks as a group of PBs. Of course, some gains in increasing outstanding up to 2008-09 might have been partially wiped out by the implementation of the Agricultural Debt Waiver and Debt Relief scheme announced by the Government. Total and direct outstanding credit per branch of PBs was Rs.106.971 million and Rs.69.712 million respectively.

NPAs in agriculture of PBs recorded insignificant growth in 2011 over 2010 as compared to 60.9% for all SCBs.NPAs in agriculture of PBs accounted for 19.54% of all SCBs in 2010 which significantly declined to 13.04% in 2011. However, they were significantly higher than NPAs in priority sectors, SSIs and others but were significantly lower than NPAs in non-priority sectors, public sector and total in both the years. Three banks together in 2010 and four banks in 2011 contributed to 82.5% and 83.5% of NPAs.

Efficiency Parameters: Despite the late entry of PBs in the field of financing agriculture and limited presence in rural and semi-urban centers, their performance compares favorably well with that of public sector banks in most parameters and PBs have relatively low level of NPAs in agriculture.

Strategy: Strategy to improve performance and contain NPA needs to focus on following initiatives by banks and Government.

Banks: As on end-March 2012, all PSBs, PBs and RRBs together have provided banking connectivity to 1,47,534 villages out of 6,38,387 as against 54,258 villages in March 2010. Almost all 74,000 villages with more than 2000 persons have been connected with banks. In April 2011, banks have been mandated to allocate at least 25 % of all new branches to unbanked rural areas and open intermediary brick and mortar structure between the base branch and customer locations, which can bring efficiency in cash management, documentation, supervising Business Correspondents’ operations and redressing customers’ grievances.

Farmers’ inability to withstand against unfavorable climate, drought, floods, adopt yield-maximizing technology and secure remunerative prices jeopardized their capacity to larger an extent rather than their unwillingness to repay loan. This created NPAs in agriculture. In order to contain and efficiently manage NPAs in agriculture strategic actions need to focus, inter alia, viz.

Government: Union and State Governments have a pivotal role in creating an enabling environment that can sustain the flow of credit to agriculture and borrowers repay loans on time. These include the following, among others.